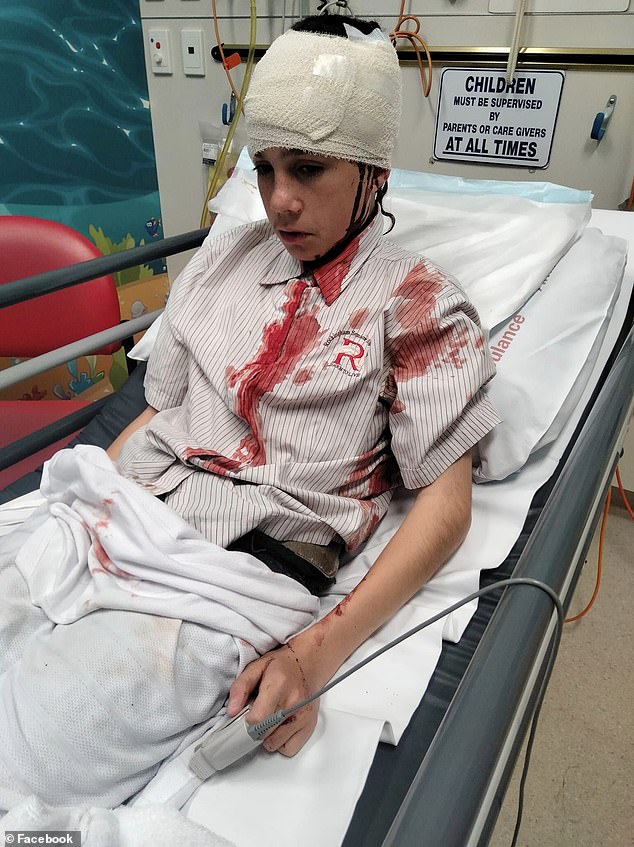 After being ambushed and viciously battered by a group of high school bullies, a young boy’s head has been stapled back together.

However, as the Year 8 student with ADHD and global developmental delay exited the bus at Wilmott Drive, three older students savagely beat him.

During the attack, Boston’s head was slashed open and began flowing blood.

Two of the bullies recorded the assault on their cell phones while mocking Boston as he was thrashed.

Boston was able to escape to a neighboring skate park, where he urged a friend to call an ambulance while leaving a trail of blood in his wake.

The small youngster was transported to the hospital and required skull reconstruction.

According to 9News, he feared he was “about to die” while being assaulted.

His clothing, rucksack, and footwear were stained with blood.

Additionally, there was blood on the path where he was attacked.

His distraught mother, Jaycinta, told 9News about the brutal attack and its traumatic impact on her kid.

She stated, “There was blood everywhere when I entered the room; he was hysterical, confused, and still in shock; it was horrific, utterly awful.”

It’s traumatic, so I’ll be scooping him up more and making sure he’s close to me and protected; he has migraines, is in pain, and woke up numerous times yesterday night with awful dreams related to the occurrence.

Boston is currently too terrified to ride the bus again.

His family has reported the incident to authorities.

WA’s Department of Education issued a statement to Daily Mail Australia indicating that they were aware of the attack in Boston and supported the ongoing police investigation.

Support is prioritized for kids affected by acts of violence, and this includes access to school psychologists.

This type of conduct is never allowed.

»High school bullies attack Perth teenager, leaving him in a pool of blood as medics staple his head«