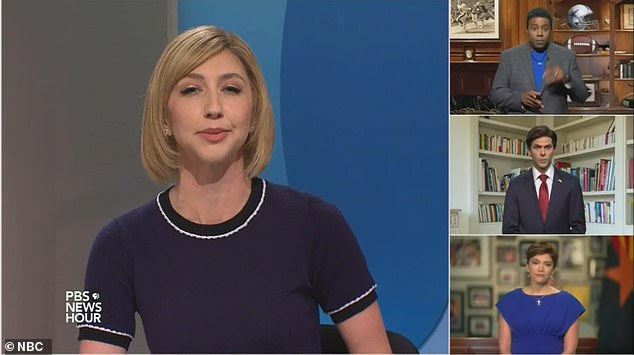 The show dedicated its cold open to these political newcomers while mocking them in a parody of the ‘PBS News Hour’ interview format.

The newscaster then comments on how, despite beginning their separate campaigns as underdogs, the three have become stars of the Republican Party, albeit she does not specify how.

“Okay, well, all three of you have been gaining in the polls over the past few weeks despite having no political experience,” she says, as the improbable candidates stand at their podiums on the fake set.

She then turns her attention to Thompson’s Walker, a former NFL running back who is the Republican candidate for the forthcoming Georgia Senate election.

The entire universe is a mystery. Ain’t it? As an illustration, a Thermos keeps hot things hot and cold things cold. My question is, how do it decide? We’re investigating this thoroughly.’

When asked why millions of Georgians are voting for him despite two women claiming he paid for their abortions, the former Cowboys running back simply responds, “Gas.” The price of gasoline is really expensive.

In character, Thompson stated of Walker’s achievement, “Like the great Trump Donald said, I can pay for an abortion in the middle of Fifth Avenue and not lose any votes.”

He added that the last time he checked, his son was a male.

While imitating Dr. Mehmet Oz, who quit his long-running show last year to run for governor of Pennsylvania, cast member Day wore a Phillies cap and embarrassingly boasted to fellow panelists about having a fantastic ‘Philadelphia Cheese and Steak’ in the state’s modest capital city.

Attempting to appeal to Philly’s more blue-collar, working-class voters, but betrayed by the TV doc’s signature stuffy cadence, Day, as Oz, explained he had a ‘lucky break’ due to Democratic opponent John Fetterman’s stroke, before promoting diet pills guaranteed to help dieters lose 30 pounds per day.

Former Phoenix TV anchor Strong’s Lake thanked Woodruff for bringing her on the program, which the Republican criticized as a “beautiful little show full of lies.”

Pressed about denying the 2020 election results and her support for former President Trump, Lake instead opines as to why she appeals to voters, with the show clearly ridiculing the newswoman’s attempts to assert her supposed ‘folksiness’ on residents of her home state, despite possessing an unconvincing demeanor.

“Arizonans want to talk about the issues that affect them, such as crime in New York or crime in Detroit, or the most pressing issue, drag queen story time,” she continues, referring to the controversy surrounding the recent introduction of drag queen story time in Arizona and Florida public schools.

Men dressed as loud, sassy ladies encouraging toddlers to read? Not under my watch, she replied. If the citizens of Arizona elect me, I will ensure that they never vote again.

This episode, which broadcast on October 29th, was hosted by musician Jack Harlow, who also served as the night’s musical guest.

The skit coincides with the upcoming midterm elections in the US, with candidates due to face off the next week.

According to a recent poll, 51 percent of probable Pennsylvania voters support Fetterman, who suffered a stroke five months ago and then stumbled during a highly viewed debate last week, while 49 percent support Oz.

In Georgia, the senate race is likewise very competitive. The incumbent senator, Raphael Warnock, has a substantial lead among early votes, although the challenger, Walker, may receive support from Election Day voters.

In Arizona, Katie Hobbs, who had led her opponent by 5 to 7 percent for the bulk of the campaign, suddenly trails her opponent by single digits in numerous polls after declining to debate her opponent earlier this month.

The differences between the aforementioned candidates are substantially within the historically acknowledged margin of error for pre-election surveys, which is 4.4%. Midterm elections are scheduled to begin on November 8.

»Herschel Walker, Dr. Oz, and Kari Lake are mocked by SNL in their cold open«