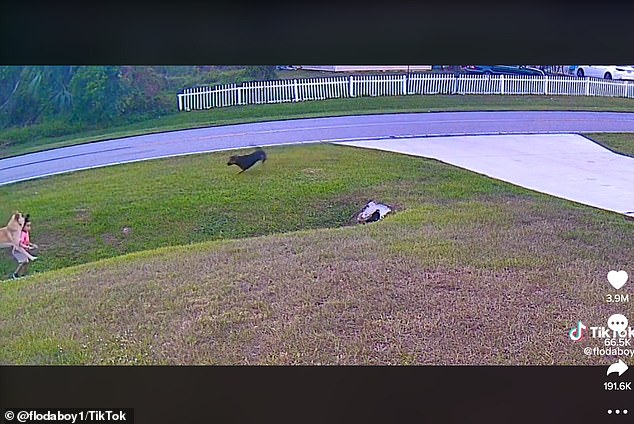 A six-year-old Florida kid is rescued when his beloved German shepherd rushes to protect him from a neighbor’s dog that has gotten loose and is charging at him.

The terrifying occurrence occurred on November 8 while the young kid was playing with his dog, Tank, on the front lawn of his South Florida house.

According to the boy’s father, the neighbor’s dog escaped and chased and charged at his son.

The family dog, Tank, a one-year-old German shepherd, felt that his best friend was in danger and rushed to his defense.

In a video, Tank’s protective instinct comes into high gear as he pulls the youngster away from danger and then stands over him to protect him before fighting the other dog.

The child runs to his mother in tears as his father comes to the scene to break up the dog fight. After both dogs have barked, growled, and charged at one another, the dog of the neighbor finally runs home.

The family dog, Tank, a one-year-old German shepherd, felt that his best friend was in danger and rushed to his defense.

Tank’s protective instinct kicked in as he pushed the youngster out of harm’s path and stood over him to protect him before confronting the other dog.

Before the father arrives, the two dogs charge and bark at one another before the neighbor’s dog runs home.

The child goes to his mother in tears as his father rushes to the scene as both dogs bark and attack at each other, before the neighbor’s dog flees.

Tank’s father uploaded a video demonstrating what a “good kid” Tank is. In addition, he reveals that their second dog, a blue-nosed pit bull, was racing out of their garage as backup, but he stated that Tank had the situation under control.

“Our son was well, and the other dog was returned to its owner,” the parent reported.

Since the video went viral, other dog lovers have praised Tank’s bravery.

Get the German Shepherd a large dog bone, steak, or whatever he desires; he deserves a reward. “Good boy!!!,” someone wrote.

Another person remarked, “What a magnificent puppy! Thankfully, the youngster was not injured during this terrible moment for the mother. People, if you can’t control your dog, keep it on a leash!’