Skip to content
Home » News » News » Hero clings to the outside of a window 80ft up a tower block to save girl, three, in Kazakhstan 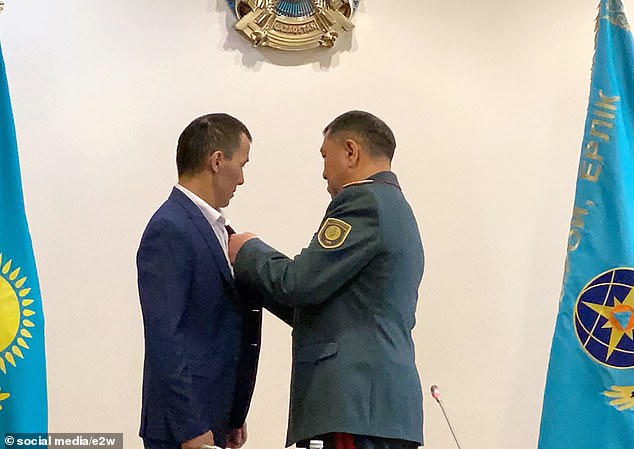 This is the heart-stopping moment a hero clings to the outside of a tower block window to rescue a young girl after spotting her dangling from the eighth floor.

Sabit Shontakbaev, 37, was on his way to work with a friend when he saw a crowd below staring up at the three-year-old.

Her mother had gone shopping and left her home alone in Kazakhstan’s capital Nur-Sultan when she piled up her toys and cushions to climb out of the window.

Sabit, a father-of-four, immediately rushed upstairs in a bid save her before she fell to her death.

He said: ‘We noticed that people were gathering and I immediately looked up and saw a girl hanging from the eighth floor.’

He ran inside the block and went up to the seventh floor, to the flat immediately below where the girl was precariously hanging on.

‘We knocked and fortunately they immediately opened the door,’ he said.

He climbed out of the window below the terrified girl who by then had been holding on for 15 minutes.

I did not have a safety harness so my friend held my legs.

‘At that moment I didn’t think about anything, I just wanted to help the child.’

He dramatically reached up and caught the girl’s legs then tugged her down so he could catch her.

Then he carefully passed her through the open window to his friend.

Sabit did not wait to be thanked by the girl’s mother as he did not want to be late for work.

‘I didn’t even see her parents,’ he said. ‘Afterwards, I went straight to work with my friend. Nobody knew that this would happen.

‘I just saved the child and left, and in the news and social networks they suddenly began to call me a hero. I do not consider my actions heroic.

‘To me, everyone should lend a helping hand in such situations.’

The girl had piled cushions and soft toys under the window and then climbed out, said an official source.

Shontakbaev has been hailed for his brave deed by the city’s mayor Altai Kulginov.

He was awarded a medal for showing ‘courage’ by the deputy emergency minister Ibrahim Kulshimbayev.

But he was also offered a new job as a rescuer after his astonishing bravery.

Reports say Shontakbaev – who has a daughter and three sons – will also be awarded with a new three bedroom apartment, and a television.

This will enable his family to move to Nur-Sultan and live with him.

Until now he had been earning money in the capital and sending it home to his wife in Kyzylorda.

The fees for his children to attend summer camp will also be paid.