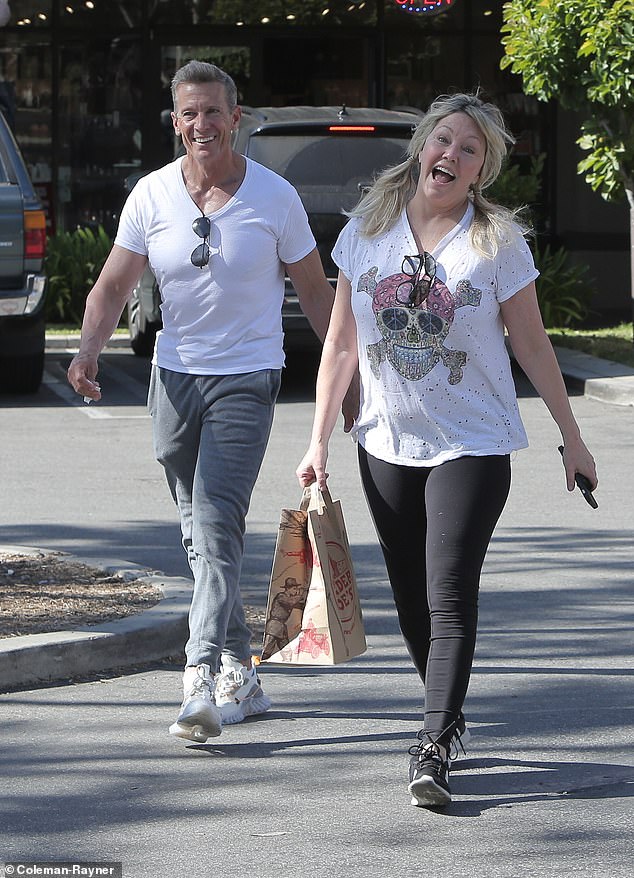 Heather Locklear was full of the joys of spring last week as she stepped out for a garden party in the California sunshine with fiancé Chris Heisser.

The pair, who met in high school and are both 60, looked more in love than ever on their Friday afternoon outing near their home in the San Fernando Valley, exclusive DailyMail.com photos show.

Locklear was seen laughing and beaming with joy as she and Heisser, a contractor and former AMA motocross racer, picked up a chocolate cake to share out at the gathering.

The actress looked healthy and svelte in black leggings, Adidas sneakers, and a white T-shirt with a skull pattern, and styled her blonde hair in two low pigtails.

The beautiful warm sunny weather seemed to have had both Heisser and Locklear in great spirits, as the two were seen laughing and smiling throughout their trip from store to the party.

The couple pulled up to a house in the San Fernando Valley with some dessert in hand before enjoyed a wholesome afternoon with friends.

Things appear to have turned around for the better for Locklear, who had fallen into substance abuse that resulted in several brushes with the law and a stint in a mental health facility in recent years.

She made her return to the small screen last October starring in Lifetime TV movie, Don’t Sweat the Small Stuff: The Kristine Carlson Story, her first project in almost five years.

The former Melrose Place star played Kristine Carlson, co-author of the best-selling book Don’t Sweat the Small Stuff, which she had written with her husband Dr. Richard Carlson.

The film follows Kristine as she deals with the unexpected death of Richard, 45, in 2006.

Appearing on Good Morning America to promote the film late last year, Locklear explained how she knew this particular project was the right role for her return to Hollywood – especially after she had previously said she wasn’t sure she would work again.

‘It was pretty easy. I didn’t want to do anything silly. I wanted to do something that had its weight,’ she said.

Adding: ‘And I prayed to God that whatever lands in my lap, I wanted it to be spiritual.’

‘It was strange and it landed in my lap. It’s all about loss and recovery and coming back from a loss and I just like the depth of it. I loved the books and I love Kris [Kristine].’

Heather said about her first meeting with Kristine: ‘The first time I met Kristine, we spent the night at her home. And then she came for my 60th birthday and stayed with me. She’s now one of my best friends,’ she told People.

They reconnected in 2017, with Heather posting a photo in September of that year to her Instagram account of them in bed with the caption: ‘My favorite person on earth. 40 years later.’

However, Heather’s battle with addiction almost derailed the romance.

She was arrested on February 25, 2018 after allegedly fighting with Chris and attacking the police officers that responded to the 911 call her brother Mark made to her home.

More than a year later she pleaded ‘no contest’ to charges stemming from that arrest and was sentenced to 30 days in a residential mental health facility.

The couple became engaged in April of 2020, after Heather had completed a full year of sobriety.