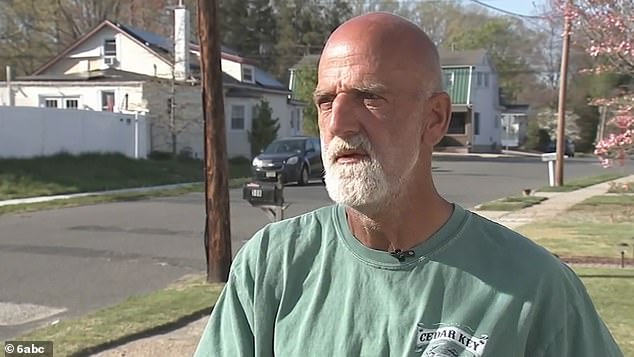 Dramatic bodycam footage captures the moment New Jersey police officers save a woman whose car veered off a pier and landed upside down in the water.

On April 28 officers from the Gloucester City Police Department were called to the Freedom Pier where an unidentified woman’s car had plunged off, ending up almost entirely submerged in the Delaware River Gloucester City officers John Bryszewski, Carlos Depoder and Sean Gartland were among the first to arrive to the scene and rushed to action to save the woman.

‘By the time I get in, I start opening doors and start checking, trying to find her,’ officer Gartland told ABC6.com

He was followed by officers Bryszewski and Depoder who also search the car and find the driver by the dashboard.

‘When I get in, I go to the front passenger door. I check there first. Then I check the back door. She was located up in the dash area,’ officer Depoder said.

After locating her they managed to pull her out of the car and began to perform CPR on her on a log in the water because they couldn’t manage to pull her up 10 feet back up to the pier.

Then three good Samaritans who happened to be out on a barge working pulled up on their boat and offered to help.

‘There was no way we could have got her up without some kind of intervention,’ officer Gartland said. One of the men on the boat was a volunteer firefighter who continued chess compressions until they were able to get the woman to a nearby dock.

Gene Blemings, one of the men on the boat, told ABC 6 he was just glad to do his part to help in the rescue.

‘I’m just happy that she’s alive. Hopefully everything turns out good for her, that’s all that matters to me,’ said Blemings.

Police are still investigating the cause of the crash and said the driver remains in critical condition but is expected to survive.

All in all officers say they are just glad everything worked out.