Skip to content
Home » News » News » Head teacher, 64, came to school’stinking of drunkenness’ and ate raw garlic to cover it 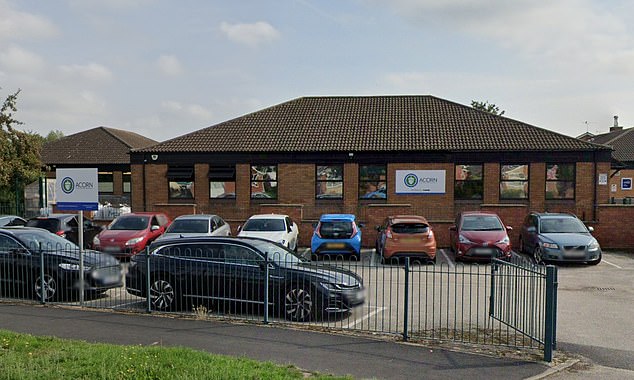 A misconduct panel heard that Mr. Tucker’s appearance was disheveled, he was frequently unshaven, his shirt was unironed and not tucked into his pants, and he frequently cursed at students.

The headmaster was also accused of making obscene remarks around students, including saying, “Hey miss, you’ve got large t**s and I’d love to suck on them” in front of 20 students during an assembly.

In addition, he threatened an unruly student in the schoolyard by saying, “I’m going to knock your head off and spit down your neck.”

A coworker reported to education watchdogs that Mr. Tucker kept numerous bottles of cologne, mints, and gum on the shelf above his desk.

When I entered Mr. Tucker’s office, he frequently went for his aftershave and sprayed it, or began chewing on mints.

Jeremy Tucker, 64, was prohibited from teaching for three years after appearing in front of students while intoxicated and making inappropriate remarks (Acorn School in Lincoln pictured)

Mr. Tucker attempted to mask the odor with excessive amounts of cologne and raw garlic bulbs.

“Around June 2016, Ofsted was conducting an inspection at the school; Mr. Tucker was sitting in the senior leadership team munching on garlic bulbs while smelling of alcohol.”

In addition to ridiculing the students and calling them stupid, he informed a horrified assembly that one of the things they should not say to staff was, “Hey, Miss, you’ve got big t**s and I’d love to suck on them.”

The Teaching Statute Mr. Tucker shared an office with a female coworker, but she had reduced her hours, leaving him frequently alone in his office.

Another coworker noted, “Mr. Tucker frequently arrived with a strong odor of alcohol and bloodshot eyes.”

On the days this colleague was out from school, Mr. Tucker would arrive late and smell of alcohol, which became a running joke among the staff.

A kid in Year 10 once confronted the head of reception, stating, “I am not making fun of you… but you appeared to have been carved out of a bean.”

Mr. Tucker answered, “What does it mean to chunk out your bean?” The student responded, “Red-eyed and high,” to which Mr. Tucker replied, “I can guarantee you I am not.”

A teacher notified a superior in November 2018 that Mr. Tucker’reeked of alcohol’ and that she was not shocked because Mr. Tucker has a habit of coming to school on Thursdays smelling of alcohol.

The panel heard that a few minutes later, she observed Mr. Tucker to be quite unstable on his feet and to be speaking incoherently.

“When Mr. Tucker left the administration side of the office, she walked there to use the photocopier and detected a strong odor of alcohol.

Mr. Tucker drove to the Priory City of Lincoln Academy at around 9 a.m.

She spoke with two coworkers who all concurred that the manager had been drinking, so she reported him to the safeguarding department.

Tucker was the head teacher of the Acorn Free School in Lincoln for six years, beginning in 2013.

When Mr. Tucker departed the school, she discovered his golf bag, which he had previously kept in his office but moved to the PE supplies when he changed offices.

When she and a coworker opened the bag, they discovered empty vodka bottles.

In October 2018, Mr. Tucker spoke to approximately twenty students from 7th to 11th grade on how sexualized statements made to staff cannot be dismissed as joking.

Mr. Tucker exemplified the type of language that would not be accepted by the staff by saying, “Hey Miss, you’ve got large t**s; I’d love to suck on them.”

Fiona McLaren, the head of the panel, stated, “All the students in the assembly appeared stunned, and the atmosphere in the room became quite unpleasant.”

Mr. Tucker acknowledged he made the remark in the assembly, but he could not recollect the bulk of events.

Concerns about the head were identified to protection officers and relayed to the board of governors two years prior, educational watchdogs learned.

However, no additional action was taken until the November 2018 episodes, after which he was suspended. He consented to resign in 2019 without a disciplinary hearing.

John Knowles, the Education Secretary, expelled him from the profession for at least three years, stating, “Mr. Tucker did not submit any evidence demonstrating insight or remorse for his actions.”

“In my opinion, the lack of insight poses a risk that this behavior will be repeated, putting the future well-being of students at risk.”

»Head teacher, 64, came to school’stinking of drunkenness’ and ate raw garlic to cover it«