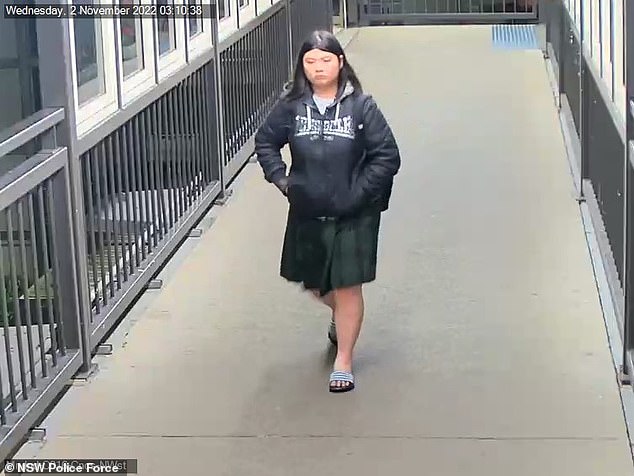 The welfare of an 18-year-old autistic student who was last seen wandering through a train station at 3 a.m. on Wednesday is of significant concern.

Katherine Tran has not been seen since early Wednesday morning, when her image was captured by surveillance cameras at Merrylands station in Sydney’s west.

She is observed strolling down a ramp while wearing a black Lonsdale jacket with a zipper, a green tartan skirt with thongs, and a black bag slung over one shoulder.

The absent student keeps her hands in her jacket pockets and displays no expression as she stares straight ahead.

Wednesday at 1am, Tran left her Wingello Street residence in the western Sydney suburb of Guildford.

The police informed Daily Mail Australia that her behavior was “uncharacteristic,” and her family was quite concerned.

Tran is in 12th grade and is now taking the HSC tests.

She is known to frequent the Parramatta Westfields retail mall and the Central Business District, therefore police suspect she is using the public rail network.

She is characterized as having an Asian appearance, standing approximately 155 centimeters tall and having dark hair.

Police encourage anyone with information that could help locate Tran to contact them immediately.