Skip to content
Home » News » Sports News » Harry Kane might be BOOKED for wearing an LGBT armband, and players WILL kneel 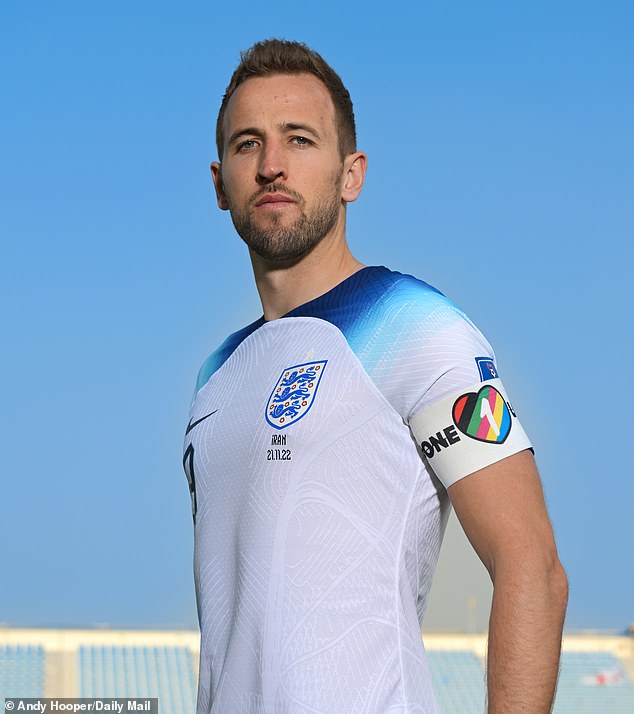 This morning, the controversy surrounding Harry Kane’s decision to wear the ‘OneLove’ rainbow armband for England’s World Cup opener grew as the FA admitted that the threat of a yellow card could prompt them to “work out if there is another way to show support.”

The armband is a sign of support for the LGBT+ community, and captain Kane plans to wear it for the 1pm match. In Qatar, homosexuality is still outlawed.

However, FIFA has strict regulations regarding the apparel that players may wear, and armbands are not permitted.

If Kane comes out wearing the ‘OneLove’ band this afternoon, he risks an immediate yellow card.

If he wears it again in their second game, the captain could receive a second yellow card and be suspended for the third game.

This morning, discussions were still ongoing, but FA chief executive Mark Bullingham stated that the threat of a sporting sanction could cause the team to reconsider.

He acknowledged, “It is a very active situation, and there are ongoing discussions; we are currently addressing these issues.”

‘It is true that FIFA indicated yesterday that there could be sporting sanctions, and that is unquestionably a matter we must address.

“We’ve made it clear that wearing the armband is important to us, but we also need to work through all of the current discussions and see where they lead.”

“We are currently addressing this issue; we have had meetings this morning with FIFA and discussions are ongoing.” As stated, we are eager to wear the armband and intend to do so, but we must consider the repercussions.

‘In this type of situation, there is typically a fine. We would be willing to pay the fine in order to demonstrate our support for inclusion.

Radio 4 quoted him as saying, “If the threat of sporting sanctions is real, we need to examine that – we need to take a step back and determine if there is another way we can demonstrate our values.”

It is the latest in a string of recent controversies, including a last-minute alcohol ban, a largely empty stadium for the opening ceremony, and a crush of thousands of people attempting to enter FIFA fan zones.

Last night, crisis talks were held as the standoff continued, but the Football Association of England remained steadfast in its moral stance regarding the rainbow armband, which is intended to signal respect for gay rights and equality.

What is the OneLove armband?

For this year’s tournament, nine countries, including England and Wales, had intended to wear the OneLove armband.

The armband is aimed to encourage diversity and inclusion in football and has its roots in the Netherlands.

UEFA, the governing body of European football, permitted Georginio Wijnaldum to wear the armband during a 2021 European Championship match in Hungary.

It is a white armband with a heart and the words “One” and “Love” imprinted on it.

The armband was created to campaign for the rights of the LGBT+ community, as well as other marginalised groups in football, and to promote equality for all.

It is an appeal to respect everyone’s human rights regardless of age, ethnicity, sexual orientation, gender identity, country, or disability, despite having a central theme connected to the LGBT+ community.

The new dispute follows a rocky beginning to the competition on Sunday, when Morgan Freeman performed a magnificent opening ceremony.

The 85-year-old actor, who apologized for sexual harassment allegations four years ago, raised eyebrows when he narrated a disturbing section titled The Calling, telling hundreds of millions of viewers around the world, “We all meet here as one large tribe.”

When the action eventually began on the field two seconds early because the referee did not wait for the stadium’s countdown to end, there was bad news for the host country.

The home team lost 0-2 against Ecuador, whose fans mocked Qatar’s alcohol ban by chanting ‘queremos cerveza,’ or ‘we want beer.’ The match was witnessed by the Gulf state’s royals and David Beckham. Beckham, who has been criticized for being a paid World Cup ambassador for Qatar, sat in the VIP section.

The oil-rich nation has been criticized for its treatment of foreign labor, LGBT rights, and social restrictions, and has staked its reputation on hosting a successful tournament. It has been accused of using “fake fans” to generate positive coverage of the World Cup.

The Football Association, who have also stated that England’s players will kneel during the tournament, are desperate for captain Kane to wear the armband as a sign of equality at a tournament that has been overshadowed by criticism of Qatar’s human rights record.

However, FA officials were anxious on Sunday night that Kane could be issued a yellow card if he wears the armband as planned, because doing so would violate FIFA’s regulations.

Executives in English football are seeking clarification from FIFA over the penalties that could be imposed if they proceed with their decision.

English football’s governing body had anticipated a fine for Kane’s violation of FIFA’s regulations, but they were anxious about the possibility of Kane being cautioned and, consequently, facing a suspension.

Kane stated, “As a squad, staff, and organization, we have made it obvious that we wish to wear the armband. I am aware that the FA is in discussion with FIFA and that a decision will be made prior to kickoff.’

Gareth Southgate, the head coach, continued, ‘I am aware that there are conversations occurring. Several of the European nations have spoken. We have made our position clear, therefore we hope that all issues will be settled prior to the game.

The England swore to “bring some genuine happiness” to their homeland. He promised to “deliver” for England and said the team had been practicing penalties to avoid the nation’s typical agony.

The United Kingdom is one of nine nations wearing the ‘One Love’ armband. In fact, word of a prospective reservation had reached the German and Dutch camps.

Holland captain Virgil van Dijk stated prior to his team’s match against Senegal, ‘From our perspective, nothing has changed. If I were to receive a yellow card for wearing it, we would need to discuss the matter, as I dislike playing while on a yellow card.

It is believed that the teams are exerting pressure on FIFA to permit the armbands due to Qatar’s traditional social customs. However, FIFA has already conceded to Qatari authorities on important promises such as alcohol sales in an effort to preserve the hosts’ support.

After the opening match began at 4pm UK time, the stadium – intended to mimic a typical Bedouin tent – appeared to quickly fill, with many seats occupied by the show’s performers.

The intention of last night’s extravagant performance, which also featured Jung Kook of the South Korean boy band BTS, was to put a stop to the issues. As it occurred, though, riot police were sent to a fan zone in the capital to quell mass disorder.

Tens of thousands of fans pushed and shoved against police lines in order to enter the Fifa Fan Festival on Doha’s Corniche, which features a large TV screen for viewing matches and a beer tent. As protesters begged authorities to let them pass, riot police armed with batons and shields stood guard. One, Hatem El-Berarri, remarked, “It’s quite unsafe; people could die.”

He stated, “Older individuals and ladies cannot handle such throngs.” Maluma, who sings on the World Cup’s official anthem, stormed out of a TV interview after being accused of ‘whitewashing’ human rights abuses in Qatar, dealing a further blow to World Cup organizers.

Freeman performed an act with Ghanim al Muftah, a 20-year-old entrepreneur and influencer who was born with caudal regression syndrome, a rare disease that hinders the development of the lower spine.

He invited the Hollywood star to come over. Freeman responded, “I’m unsure, am I invited?” al Muftah responded, “We sent out the call because everyone is welcome.” This is an invitation sent to the entire world. Freeman, whose filmography includes the Hollywood classic The Shawshank Redemption, asked the Al Bayt stadium crowd, “How can so many countries, languages, and cultures join together if only one approach is accepted?”

Last Monday, the morals sheikhs of Qatar imposed a last-minute ban on drinking at the stadiums.

Yesterday, official sponsor Budweiser released a photograph of tens of thousands of cans stockpiled in a warehouse and offered to deliver them to the World Cup champions. Morgan’s participation at the ceremony comes four years after he was accused of sexual misconduct by eight women and apologized to ‘anyone who felt uncomfortable or insulted’ by his behavior, stating that it was ‘never my aim’

It is extremely upsetting to watch Morgan Freeman take the money and support an authoritarian administration,’ one football fan commented scathingly on social media. Qatar stated last night that the mass issue occurred after the venue’s main entrance was momentarily closed because it reached capacity early.

»Harry Kane might be BOOKED for wearing an LGBT armband, and players WILL kneel«