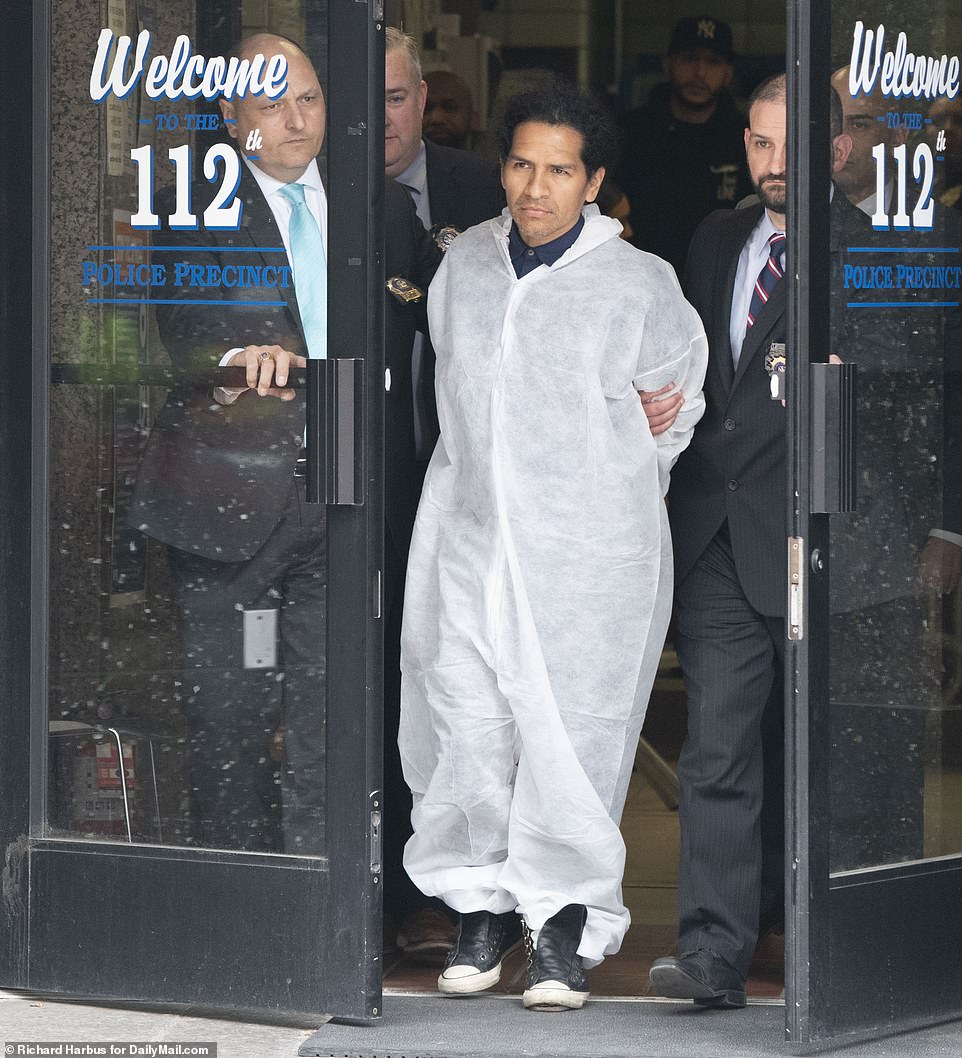 Queens mother Orsolya Gaal and her lover had been having an on-off affair for two years before he murdered her with a kitchen knife in her basement last week while her 13-year-old son was upstairs.

David Bonola, 44, was arrested on Thursday in the early hours of the morning. He was spotted by police on Wednesday night and brought in for questioning then confessed to murdering Gaal in her home on April 16 shortly before 1am.

As he was put in a police car on Thursday in front of journalists asking why he killed her, he screamed: ‘F**k you motherf****r!’

The pair started seeing each other in 2020 after he worked in the family home where Gaal lived with her husband Howard and two sons. It was an on-off relationship which they rekindled in April, but which had recently ended again.

On Friday night, not long after midnight, Gaal let Bonola into her home. It’s unclear if she had invited him over, or if he showed up unannounced. They went inside and down to the basement because her youngest son, Leo, was upstairs at the time. Her husband Howard and oldest son Jamie were out of town looking at colleges.

At some point, the pair started arguing and Bonola stabbed her 58 times using a knife that he found inside the house. It is not clear what the argument was specifically about.

He then retrieved her son’s hockey bag and waited until 4am, then wheeled her body out of the home and dumped it less than half a mile away. He also sent a text to Howard Klein, Gaal’s husband, claiming to have been someone she once sent to jail in a failed attempt to throw police off his scent.

Bonola then walked to his own home, through Forest Park. The next day, he went to hospital for treatment for wounds on his hands.

On Wednesday night, as police officers were canvassing the area in Queens for video footage, they spotted Bonola and approached him. They knew about the affair and wanted to question him so brought him in for questioning at the 112th Precinct, where he confessed to the entire murder.

At a press conference on Thursday, NYPD detectives revealed he had worked in Gaal’s family home and was ‘known to the family.’ It’s unclear if Gaal’s husband Howard Klein was aware of her affair.

‘They had been off and on and they had broken up prior but had reunited early in the month of April and their relationship was considered at an end,’ NYPD Detective Julie Morrill said.

Bonola is originally from Mexico but moved here in his early 20s.

He is from Richmond Hill, a neighborhood in Queens that is a stone’s throw from where Gaal lived with her family.

Gaal had spent Friday night at a show at the Lincoln Center in Manhattan with girlfriends.

She then returned to Queens sometime before 11pm, stopping in for a drink at the Forest Hills Station House, where she had a Moscow Mule. She then walked home to Juno Street.

It’s unclear if her killer was already inside the home or if she let him in afterwards but at 12.40am, she was stabbed 58 times in the neck, torso and arm.

Her 13-year-old son Leo was upstairs in the house at the time but did not hear anything.

‘We believe Mr. Bonola arrives between 12.30am and 12.40am. He is a handyman who is employed by Mrs Gaal. They had been having an intimate affair for 2 years.

‘Bonola is either let in voluntarily or he uses a key that he knows is kept in the barbecue. A heated argument in the basement ensues and then a violent struggle before Bonola ruthlessly and brutally stabs Mrs Gaal in excess of 55 times, causing her demise.

‘Bonola then retrieved a hockey bag belonging to the son… After disposing of the body, Mr. Bonola fled through Forest Park, where investigators discovered the jacket worn by him.