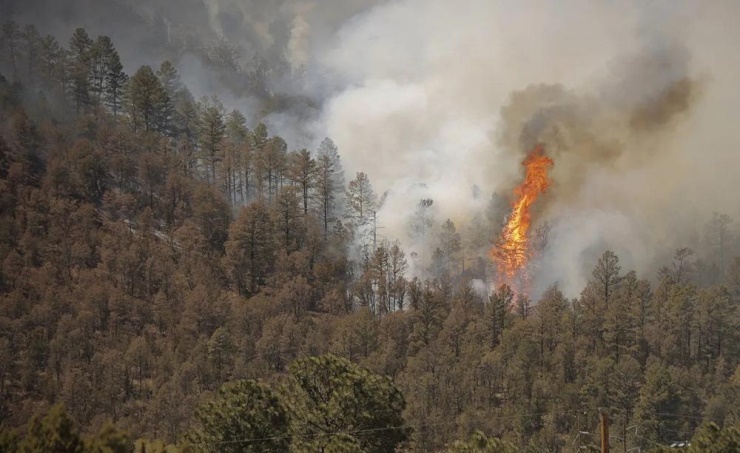 The fire has forced the evacuation of about 5,000 people in the community of Ruidoso, where the remains of a couple were found near a burned home earlier this week as they tried to flee, The Associated Press (AP) reported.

The fire sparked by a downed power line had torched an estimated 9.4 square miles (24.3 square kilometers) of forest and grass as of Friday morning, and the strong winds that battered the area earlier this week left behind toppled trees and down power lines.

The remains of the couple were found Wednesday afternoon near their home after family members notified Ruidoso police that they had tried to evacuate but were unaccounted for. Their identities have not been made public.

Fire crews on Thursday used a break in what had been a steady stream of relentless gusts to make headway against the flames.

Incident Commander Dave Bales said the strategy was “attack while we can.” But the winds in the fire zone about 180 miles (290 kilometers) south of Albuquerque were expected to pick up again Friday.

“We’re trying to keep this fire as small as possible, especially because it’s right in the community,” he said. “We’ve had a loss of a lot of structures so our crews are right there on the fire front going as direct as possible.”

Thousands of electrical customers lost power and Ruidoso’s schools were closed until next week. Schoolchildren were evacuated on Tuesday on buses with flames visible nearby.

Helicopters dropped water on the flames Thursday and firefighting ground crews created a series of fire lines aimed at preventing the fire from spreading on two fronts while others doused smoldering areas in neighborhoods that the flames raced through earlier in the week.

Elsewhere in the U.S., large fires were reported this week in Texas, Colorado and Oklahoma.

Hotter and drier weather coupled with decades of fire suppression have contributed to an increase in the number of acres burned by wildfires, fire scientists say. The problem is exacerbated by a more than 20-year Western megadrought that studies link to human-caused climate change.