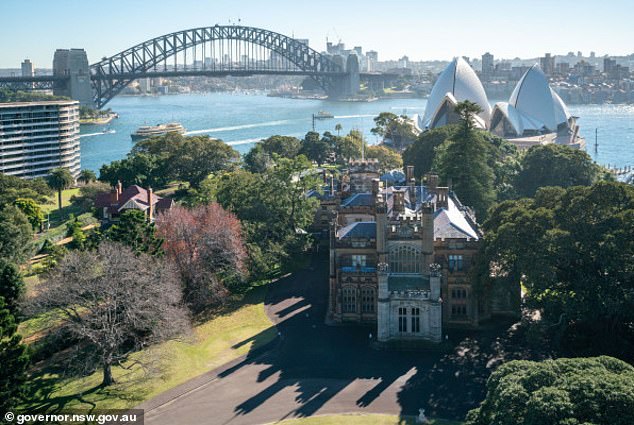 In the past three years, the Governor of New South Wales and her husband have repeatedly lodged noise complaints against parties on Sydney Harbour, causing popular family events to quiet down.

Margaret Beazley, 71, and her husband, Dennis Wilson, have lodged “frequent” complaints since moving into Government House, a massive taxpayer-funded house in the Botanic Gardens in 2019.

Many of the concerns concerned the disruption of the ‘dignity’ of official ceremonies at Government House by noise from nearby gatherings.

The Daily Telegraph said that in response to the complaints, a charity fun run, a family cycling event, and a diving event all reduced their noise levels.

As soon as they assumed office in May 2019, the Governor and her husband were troubled by their noisy neighbors.

Ms. Beazley and Mr. Wilson voiced worry at an inaugural meeting with Botanic Gardens and Domain representatives regarding noise from neighboring public events, weddings, and what they believed to be a harbourside bar.

The Royal Botanic Gardens and Domain Trust stated, “Concerns were raised about recent events such as Vivid, weddings, and noise that appeared to be coming from Busby’s Bar across Farm Cove (however, upon further investigation, this appeared to be from functions held on boats on the Harbour, rather than a venue in the Garden).”

Within weeks, the inhabitants of Government House had the volume of major events reduced down.

The Adidas Run for the Oceans in June 2019 and Light in the City in September 2019 were unable to get speakers for their events.

Government house officials met Botanic Gardens rangers to request that Light in the City, a family “night of light, food, and entertainment” where parents and children rode bicycles through light installations, be quieter.

Recently, the sound check hours for the Red Bull Cliff Diving competition had to be altered.

A Government House statement stated that, following “unexpected, intrusive disturbances” at the beginning of October, a representative requested that the event’s sound-check hours be coordinated.

The rationale was to “maintain the desired decorum” for the Queen’s Birthday Investiture Ceremonies in Government House state chambers on October 13.

However, an unidentified NSW government official stated that noise complaints were’regular’ and ‘a bit rich’ given that the site is taxpayer-funded and many of the activities in question were open to the public.

There is now worry that the Governor’s objections could hinder the return of important events to neighboring venues, such as the Domain.

Mitch Wilson, managing director of the Australian Festivals Association, stated, ‘You would think that the King’s envoy would be pleased that people and families may once again enjoy events in The Domain, as opposed to complaining about them.’

What is happening in the globe these days? It is full with impressive things.

“Come on, they reside in one of the most desirable regions of Australia. Don’t have the function there if there’s things going on,’ [they are] attempting to do functions.

The Governor and her husband reside in a 25-room, taxpayer-funded, 19th-century palace with private grounds that overlook the Opera House and Harbour.

Two years ago, it was claimed that the replacement of two rugs at Government House would cost taxpayers $162,000 each.

The 58 and 19 square metre rugs were to be billed to the Department of Premier and Cabinet of the NSW Government.

Mr. Wilson rejected ‘any inappropriate conduct’ and stated that charges made against him were’simply wrong’, as reported by The Telegraph.