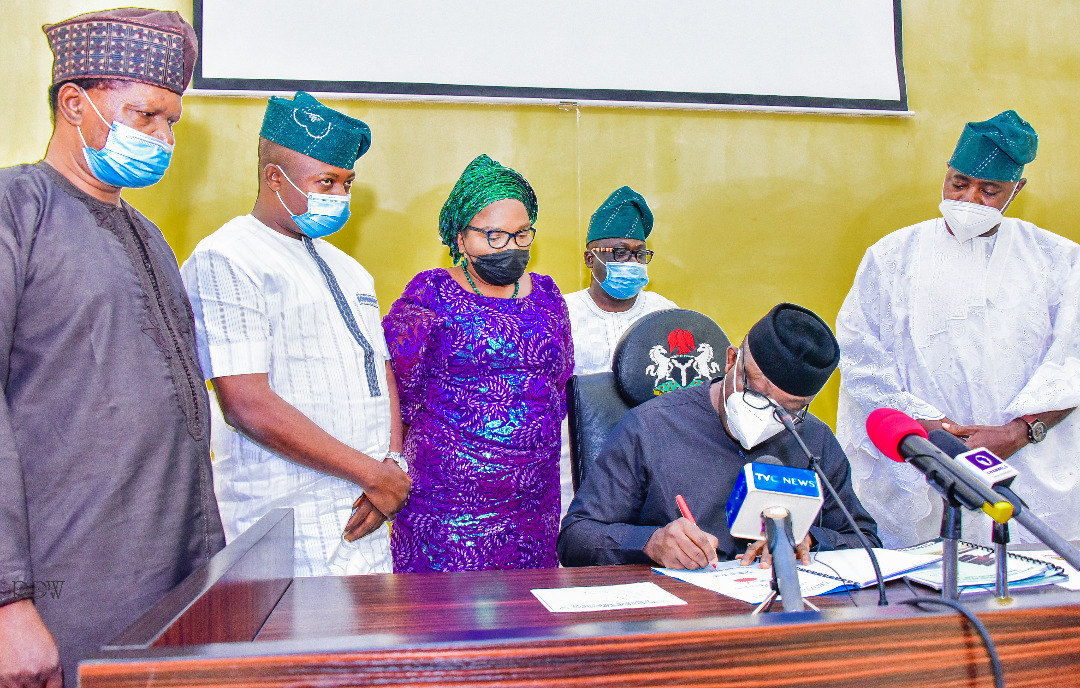 The Governor of Ekiti State, Dr Kayode Fayemi on Friday signed the Judiciary Funds Management and the Legislative Fund Management laws, 2021 and four others to laws, aimed at ensuring good governance and sustainable development in the state.

Speaking during the event, Dr Fayemi said the six laws affirmed the commitment of his administration to good governance, transparency, fair and equal opportunity for development by all communities in the State.

The governor explained that the Judiciary and Legislative Management laws would enable the three arms of government to constantly interface on how best to manage the state financial resources in meeting the evolving needs of the people of the State.

“These bills are proposed in furtherance of the Memorandum of Action and the implementation of the financial autonomy for the State legislature and judiciary, which was jointly signed by the Nigeria Governors’ Forum, the Conference of Speakers and the National Judicial Council among others on May 20, 2021.

On the law that supports the creation of additional 19 LCDAs, the Governor stressed the need for beneficiary communities to support and partner the government in successful implementation of the law as it moves to formalise the institutional delivery of the LCDAs.

The Attorney General bill according to him would guarantee the sustainability of government’s interventions and investments in the justice system and also ensure equitable accessibility and dispensation of justice to all and sundry.

“The Consumer Protection law will promote and protect the rights of consumers in Ekiti State. It is noteworthy that the law provides a framework for aggrieved citizens to seek redress against unfair trade practices and the unscrupulous exploitation of consumers.

“The sixth bill on the Economic Development Council seeks to facilitate economic growth and business competitiveness in Ekiti State by establishing Economic development council that would promote partnership and collaboration between public and private sector,” he said.

The Governor thanked the State House of Assembly and the Judiciary for what he described as “constructive partnership” between the three arms of government that led to the enactment of the laws.

“I commend members of the House of Assembly for the vigour with which they have set about the task of law making.”

Earlier in his address, the Speaker of the House of Assembly, Hon. Funminiyi Afuye, represented by the Leader of Government Business, Hon. Gboyega Aribisogan, said the bills were in fulfilment of the yearnings and aspirations of the people of the State.