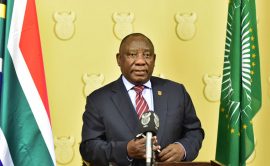 While violence against women remains a pandemic in South Africa, government continues to work tirelessly to fight the scourge against gender-based violence (GBV).

“Just as the women of 1956 fought against the injustices of their time, the women of today are engaged in a new frontier of struggle. It is a struggle for equal rights, dignity, economic liberation and freedom from violence,” said President Cyril Ramaphosa said on Monday.

The President officially released the one-year progress report on the implementation of the National Strategic Plan (NSP), where the government worked with civil society to give effect to the six pillars of the plan.

“Although the launch of the plan coincided with the outbreak of the COVID-19 pandemic, we have nevertheless made measurable progress.”

In addition, about 3 500 Family Violence, Child Protection and Sexual Offences investigating officers have undergone specialised training, while 12 public buildings have been renovated and repurposed to be used as shelters.

The President said also work has been done to ensure that all police stations have sexual assault evidence kits.

“There have been important legal reform as well. Key legislation around domestic violence, bail and the sentencing of offenders, as well as broadening the scope of sexual offences and other matters is currently before Parliament.”

According to the First Citizen, South Africa’s courts are now handing down harsh penalties and sentences to those found guilty of GBV and conviction rates in sexual offences cases have improved.

In addition, he said government will soon approve the International Labour Organisation’s Convention 190, which addresses sexual harassment and violence in the workplace.

Meanwhile, the President said the GBVF Private Sector Response Fund, which was launched this year, has raised some R141 million in pledges.

He has since called on businesses, donors, philanthropists and individuals to make donations, adding that government has allocated R21 billion over the next three years to support the six pillars of the NSP.

According to the President, a critical pillar of the plan is to ensure women’s economic and financial inclusion.

He believes that one the country can attain this is by creating procurement opportunities for women-owned businesses in the public sector supply chain.

He reminded the citizens that government announced that 40% of public procurement should go to women-owned or -operated businesses.

“We are calling on the private sector to make a similar commitment to enhancing the empowerment of the women of our country.”

He said a Women’s Economic Assembly will be launched this month to identify the supply chain opportunities for women-owned businesses in key industries such as steel, automotive and energy sectors.

President Ramaphosa acknowledged that the pandemic has been harsh on women and children.

“When growth at the economic level stalls, when development is halted and when the economy loses jobs, we know that it is women who bear the brunt disproportionately.”

He said although the social and economic relief measures implemented last year provided much-needed support to women workers, small business owners and grant recipients, the levels of employment and income among women have not recovered as fast as their male counterparts.

“We are therefore working to ensure that women benefit from the most recent relief measures and our Economic Reconstruction and Recovery Plan.”

“Although we have gone a long way to empower the women of our country, we still have much further to go. We want to live in a society where women feel safe and are safe.”

He said he envisions a society where women can assume leadership positions in the workplace, community, government and all public institutions.

“We also want to live in a society where women’s opportunities are not limited by social attitudes and practices or even by economic circumstances.

“We want to live in a society where every girl child can study what she wants to study and for as long as she needs to, and where she can take up any occupation or pursue any career of her choice.”

He has called on South Africans to reject sexism in our homes, churches, schools, government and places of work.

“Let us together raise a new generation of men and women who understand that the rights and freedoms guaranteed by our Constitution belong to all, men and women alike.” – SAnews