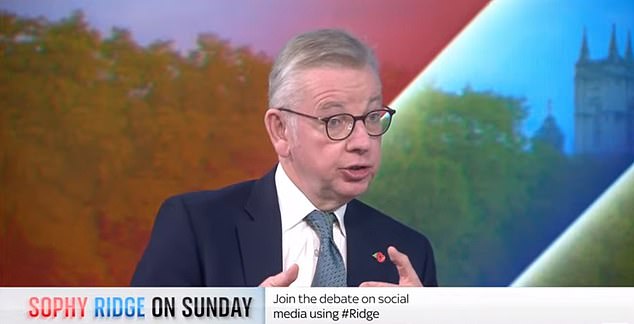 In response to accusations that Liz Truss’s personal mobile phone was compromised by hackers thought to be working for the Kremlin, Michael Gove reiterated today that the UK had “strong processes” in place for cyber security.

The Cabinet minister responded to questions about the startling disclosures in the Mail on Sunday by saying that such matters were handled “very seriously.”

It is thought that cyberspies were able to acquire top-secret communications with significant foreign partners as well as private chats with her most important political ally, Kwasi Kwarteng.

According to a person who spoke to the publication, the phone was so severely hacked that it has now been locked up within a secure government building.

When Ms. Truss was the Foreign Secretary during the summertime Tory leadership race, the hack was detected, but Simon Case, the Cabinet Secretary, and then-Prime Minister Boris Johnson concealed the information.

The texts that ended up in foreign hands are said to have included critiques of Mr. Johnson made by Ms. Truss and her future chancellor, Mr. Kwarteng, raising the possibility of blackmail. Up to a year’s worth of communications, according to sources, were obtained.

They are also said to have featured very private conversations concerning the conflict in Ukraine, including in-depth exchanges about weaponry supplies, with top foreign ministers from throughout the world.

In an interview with Sky News’ Sophy Ridge on the Sunday program, Mr. Gove, who just rejoined the Cabinet as the Levelling Up Secretary, said: “I don’t know the full specifics of what security breach, if any, took occurred.”

What I do know is that the government has extremely strict measures in place to ensure that not only are people protected but also government security and overall national security.

When questioned about the allegations that the Cabinet Secretary covered up the alleged breach, Mr. Gove said, “I’m confident that Liz both as foreign secretary and as prime minister would have followed the advice that she was given by the intelligence and security community.”

“I believe that all of us need to be attentive, especially those of us in government, to the idea that the more in-depth we discuss these issues, the greater the chance that we may provide information to those who desire to destroy our nation and its residents.

Security-related problems are something we take very seriously. Again, I must exercise caution in how I answer to your understandable point about Liz’s phone.

The astounding episode, which was made public by security sources, clarified the reason Ms. Truss was compelled to change the cellphone number she had been using for more than a decade just before she was elected prime minister.

Cabinet Ministers and advisors were alarmed by the change since they were now unable to get in touch with her.

The security breach “created extreme chaos,” according to a person with knowledge of the event, who stated yesterday that Boris was informed right afterwards and that a complete press blackout had been decided with the Cabinet Secretary.

If the Foreign Secretary’s phone can be so readily raided for humiliating personal texts by spies said to be working for Vladimir Putin’s Russia, it is not a good look for the intelligence agencies.

Ms. Truss’ allies said that she was concerned that if word of the hack spread, it may hurt her chances of winning the Premiership and that up until Mr. Case enforced a press blackout, she “had problems sleeping.”

Iain Duncan Smith, a prominent opponent of Russia and a former leader of the Conservative Party, said: “This is what we’re up against.” Russia often engages in this. They just have one goal, which is to avenge us. In general, we are all way too careless with our phones. Ministers should exercise far more caution and refrain from using their personal phones for any purpose. I think someone is hacking into my personal phone.

“This is incredibly serious,” said Yvette Cooper, the shadow home secretary. “It highlights the seriousness of the dangers from nations that would do us harm and why cyber-security has to be taken so seriously by everyone in Government.” We need confirmation that the government understands the seriousness of this.

The government does not comment on people’s security plans, a spokesperson said yesterday night. The government has effective defenses against online attacks. Ministers get frequent security briefings and guidance on how to secure their personal data, among other things.

The disclosures in The Mail on Sunday stunned security expert Professor Antony Glees, who also said: “What has occurred here is just horrible and is symptomatic of a Government that was incredibly careless when it came to questions of national security.”

“This needs to stop right now. Ministers are using their personal phones to do government work through WhatsApp and personal email. It is extremely reckless. It is horrifying beyond belief.

The fact that Boris Johnson was aware of what had occurred but decided not to tell anybody is even more disturbing. And I worry that Liz Truss may not be the only one whose phone has been hacked.

Russia, China, North Korea, and Iran are the most likely suspects since they have a strong incentive to learn what the foreign secretary is saying. Russia, though, would be the top suspect.

The danger presented by hackers representing adversarial nations and using mobile devices—often referred to as the “soft underbelly” of the contemporary state—has the security services more alarmed.

Jeff Bezos, the founder of Amazon, is said to have been hacked by the Saudi Crown Prince Mohammed bin Salman using an Israeli program called Pegasus, which allows access to phones without the owner’s knowledge. With the simple receipt of a text message—which doesn’t even need to be opened—the malware may be started on a phone. Then, while operating covertly in the background, it takes control of the device, accessing every file, and following its every move.

“Ms Truss’s phone will be at a safe Government facility,” according to former senior military intelligence officer Philip Ingram. “This implies a secure cage where the device can be forensically checked by professionals but without the hackers knowing.”

It takes some time to identify the perpetrators of these assaults, but Russia often tops the list, according to a different security source.

While serving as Foreign Secretary and Prime Minister, Ms. Truss maintained an unwavering stance toward Putin, despite the UK being one of the countries that has supported Ukraine the most.

The Mail on Sunday also reports today that Ms. Truss grew hooked on the weather forecast in the closing days of her Premiership because she was worried about a potential radioactive cloud coming towards the UK in the event that Russia detonated a nuclear bomb in or near Ukraine. According to a source, Liz was “obsessed” with the direction of the wind.

Earlier this month, The Mail on Sunday reported that Ms. Truss’s mobile phone number, which can now be shown to have been compromised, was listed online along with the phone numbers of 25 Cabinet Ministers for only £6.49.