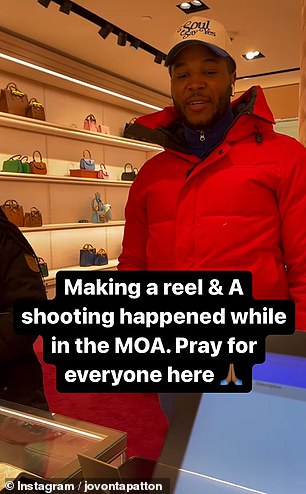 A 19-year-old man was killed after a shooter opened fire at the Mall of America in Bloomington, Minnesota, sending a gospel star and Christmas shoppers fleeing for safety.

Less than two days before Christmas, the gunshot forced the Mall of America to go into lockdown, which was lifted soon after 9 p.m. on Friday.

Bloomington Police Chief Booker Hodges stated that no arrests had been made despite the increased security measures placed in October and the presence of sixteen policemen at the time of the shooting.

Hodges stated that cops heard gunfire on the first floor of Nordstrom, and it appears that up to nine people were involved in a physical dispute prior to the shooting.

The police chief described the shooting as “just plain foolish” and emphasized that the perpetrators, who fled from the mall through the parking lot, will be apprehended and brought to justice.

Whoever is responsible, we will capture them. And whomever aids them, we will imprison you as well.’

Jovonta Patton, a Billboard chart-topping music artist, songwriter, producer, and entrepreneur, submitted a video to Instagram depicting the events from his perspective.

In the video, the recording artist is seen purchasing at a Gucci store, with the caption suggesting that he was “building a reel.”

“So, bae, did you find the purse you were looking for?” he can be heard asking the woman standing next to him.

Shortly after asking the inquiry, a loud gunshot is heard, and the woman stares directly at the camera in horror before she and Patton dive to the ground and seek refuge in the store.

In addition to falling to the ground in the midst of the pandemonium, the individual filming can be seen frantically attempting to flee the storefront.

As the video continues, a person can be heard saying, “I hope something just dropped,” as the person filming hides with other Christmas shoppers in what looks to be a store storeroom.

The mall prohibits firearms on its premises but lacks metal detectors at its entrances. In October, it conducted a month-long trial of a ‘weapons detecting system’ at its northern gate.

The mall will reopen at 10 a.m. on Saturday, but the Nordstrom shop will stay closed.

Hodges stated, “I honestly believe the family, the mother, the father, and the other relatives the mayor and I spoke to before coming out here, are in agony, and properly so, for something that should not have occurred.”

Five Twin Cities citizens were charged in August after a confrontation inside the Nike store led to shooting inside the mall.

The suspected gunman fled the scene and was apprehended in Chicago the following week. No one was wounded during the incident.

A 28-year-old Woodbury man was arrested later that month for allegedly committing an armed robbery with an AR-15-style gun inside the mall.

In October, the Mall of America began testing increased security measures with the addition of a weapons detection system and bag checks at the north entrance.

On New Year’s Eve of last year, a single gunshot was fired inside the mall, injuring two males. Later, the 18-year-old pleaded guilty and was sentenced to 45 months in prison.

This month, the Mall of America reached a settlement with the family of a 5-year-old boy who was thrown from a third-floor balcony by a guy who claimed he was ‘searching for someone to kill’

Landen Hoffman, now eight years old, was five years old in April 2019 when a man with a history of provoking disturbances at the mall hurled him off a balcony 40 feet to the ground at the Bloomington, Minnesota retail complex.

As a result of the Defund the Police campaign, violence in the city and its neighboring Minneapolis continues to spiral out of control, as evidenced by the shooting.

After the murder of George Floyd by police officer Derek Chauvin in May 2020, Minneapolis was the epicenter of protests.

By October, crime in the city had increased by a staggering 15.9 percent compared to the previous year.

And throughout the past year, 93 individuals were shot in the city, which is close to the number of homicides recorded in 1995, when the city got the moniker Murderapolis.

This year, the surrounding city ranked nineteenth out of seventy jurisdictions in terms of murders per capita.

Moreover, its clearing rate for homicide cases has decreased since 2016, when around 54 percent of cases were solved.

According to experts, the spike in crime began following George Floyd’s death in May 2020, when the city became the epicenter of the Defund the Police Movement.

The city of Minneapolis erupted in violent riots, with demonstrators demanding justice for Floyd and advocating for the dissolution of the Minneapolis Police Department.

Officials of the City Council eventually conceded and vowed to “end policing as we know it” in July 2020.

The council reduced the city’s policing budget by $1.1 million, with plans to reallocate the funds to the public health department to employ civilian violence interrupters who would mediate conflicts.

Residents reported that police began to retreat from the most violent districts shortly thereafter.

According to KG Wilson, a lifelong resident who talked to CNN at the time, the crooks were rejoicing. They were becoming wealthy. They were brazenly selling drugs.

Simultaneously, the death of Floyd resulted in a huge migration of Minneapolis police officers during the past two years due to retirements, resignations, and disability leaves.

The city council opted to dissolve the police department and has subsequently taken preparations to do so.

The number of officers in the city decreased from 900 in early 2020 to approximately 560 in August of this year, a reduction of more than one-third of the police force, according to police department leaders.

In May 2020, the average 911 response time increased from from 10 to 11 minutes earlier in the year to approximately 14 minutes.

CNN claims that it increased to 16 minutes in 2021, with response times exceeding 17 minutes in the city’s crime-ridden north side.

In November 2021, 56 percent of voters rejected a motion to defund the police and replace them with a ‘public health-focused’ Department of Public Safety.

This number was much higher in north Minneapolis, a primarily black neighborhood where 60 percent of this year’s calls for guns fired originated.

»Gospel star ducks for cover as a mall gunman opens fire in the Mall of America store, killing one«