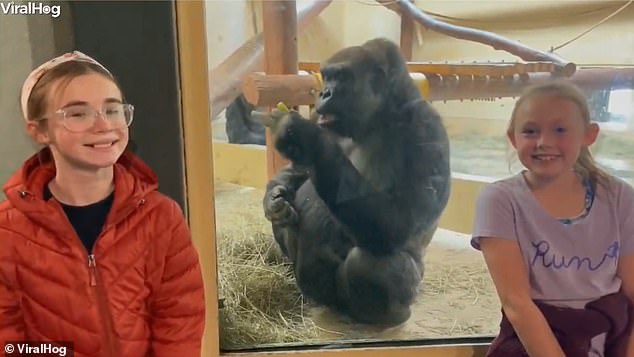 Bob, a mischievous gorilla, gave two sisters the finger while their mother videotaped them at the Cheyenne Mountain Zoo in Colorado Springs.

The footage was released on YouTube on Thursday and depicts two females standing in front of the enclosure while the primate eats a bit of celery.

The 21-second clip was submitted by the girls’ father, who claimed the family was at the zoo.

When the humorous scene was captured on film, his wife Amy and two kids Arabella, 11, and Arianna, 9, can be seen attempting to introduce the huge ape.

Arianna begins, “This is Bob,” before being brutally interrupted by the disrespectful hand motion.

The two sisters are then shown laughing uncontrollably before Arianna informs her mother, “He doesn’t like you very much.”

The video has received more than 5,000 views on YouTube and was initially shared to TikTok by the father of the girls.

“My wife, two daughters, and I were taking pictures of the girls in front of the gorilla exhibit at the Cheyenne Mountain Zoo in Colorado Springs, CO,” he said.

“My wife, Amy, then switched her iPhone camera from photo to video mode and informed the kids, Arabella, 11, and Arianna, 9, that she was now recording video.”

The gorilla was munching celery while sitting just behind the glass that our girls were standing in front of.

Arianna, our youngest child, improvised a presentation of the gorilla to the camera.

The father of Arianna explains that the gorilla was probably making the sign because he was eating.

“Our girls and I burst out laughing immediately, and on the way home from the zoo, I edited the video and uploaded it to TikTok,” he explained.

Visitors to the zoo can observe the animals and staff as they perform a variety of tasks, from providing medical treatment to having fun.

The western lowland gorilla is critically endangered, but it is the most common subspecies of gorilla.

Western lowland gorillas inhabit some of Africa’s most dense and inaccessible rainforests, therefore their actual population is unknown.

Significant populations still persist, including in the Republic of Congo’s inaccessible marshy woods and isolated wetlands.