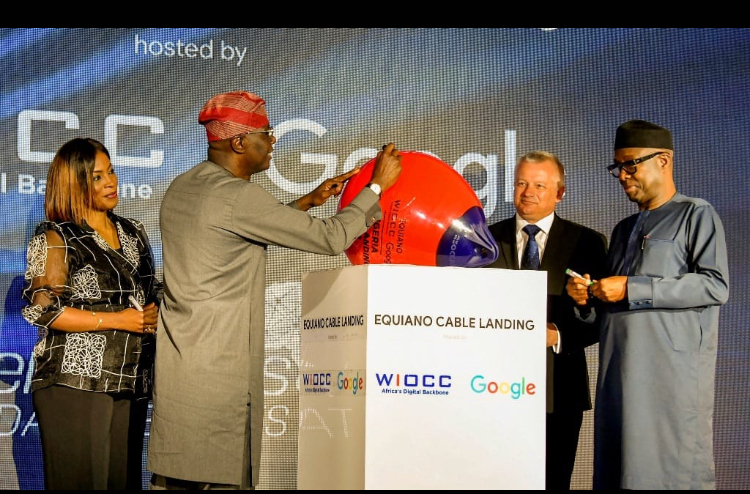 It will generate 1.6m jobs, $10b GDP for Nigeria, says Sanwo-Olu  Lagos State Governor, Mr. Babajide Sanwo-Olu on Thursday witnessed the virtual landing of the Google Equiano Sea Cable System in Nigeria, saying the country will enjoy a boost of 1.6 million jobs and $10 billion in additional Gross Domestic Product (GDP) over the next three years, on account of the new cable system.

He said with the landing of the sea cable system and other investments in high-speed internet, Lagos is about to witness an unprecedented digital revolution that will cement its global reputation as a hub for entrepreneurial innovation.Speaking at the reception marking the landing of the Eq

uiano Sea Cable System in Nigeria on Thursday at the Open Access Data Centre at Lekki in Lagos, Governor Sanwo-Olu said the new cable system is the latest element in the transformation of the physical infrastructure landscape, new roads, bridges, jetties, factories, municipal and national rail lines, among others being delivered by his administration and a host of partners and stakeholders across public and private sectors.The landing of Equiano Sea Cable System will firmly position Nigeria as the regional connectivity and content hub for West Africa, attracting cloud operators, content providers, content distribution networks and their associated ecosystems.It is significant and a demonstration of the seriousness with which Google LLC views Nigeria, the economic and demographic giant of Africa.

The new cable system is named after a Nigerian hero, Olaudah Equiano, who survived enslavement in the 18th century and went on to become a famous writer and anti-slavery activist.

Governor Sanwo-Olu said his administration is more than ever determined to deliver on its promise to make and maintain Lagos as a safe, livable, innovative and prosperous megacity.He said: “I am told that this new Equiano cable system, landing today, will deliver twenty times as much network capacity as any of the existing systems serving Nigeria.

“This means much faster internet speed, reduced cost, and greater access for our people. The net effect of this is much-needed jobs and economic growth. The economic impact assessment for the project estimates that Nigeria will enjoy a boost of 1.6 million jobs and 10 billion dollars in additional Gross Domestic Product (GDP) over the next three years, on account of the new cable system.

“In addition to this cable system, I am told that WIOCC is presently completing, on this same site, a Tier III certified, Open Access Data Centre, which will also host the landing station for the Equiano cable. This data centre will be the most client-centric data centre, and the largest data center campus, in West Africa,” he said.

Speaking earlier, the Chief Executive Officer (CEO) of WIOCC, Chris Wood, described the landing of the submarine cables as a major investment for Nigeria’s digital economy and Lagos State in particular.

He said the submarine cables will deliver high-speed internet connectivity at a reduced costWood also appreciated Governor Sanwo-Olu for providing an enabling environment for the investment of this nature to birth in Lagos State.