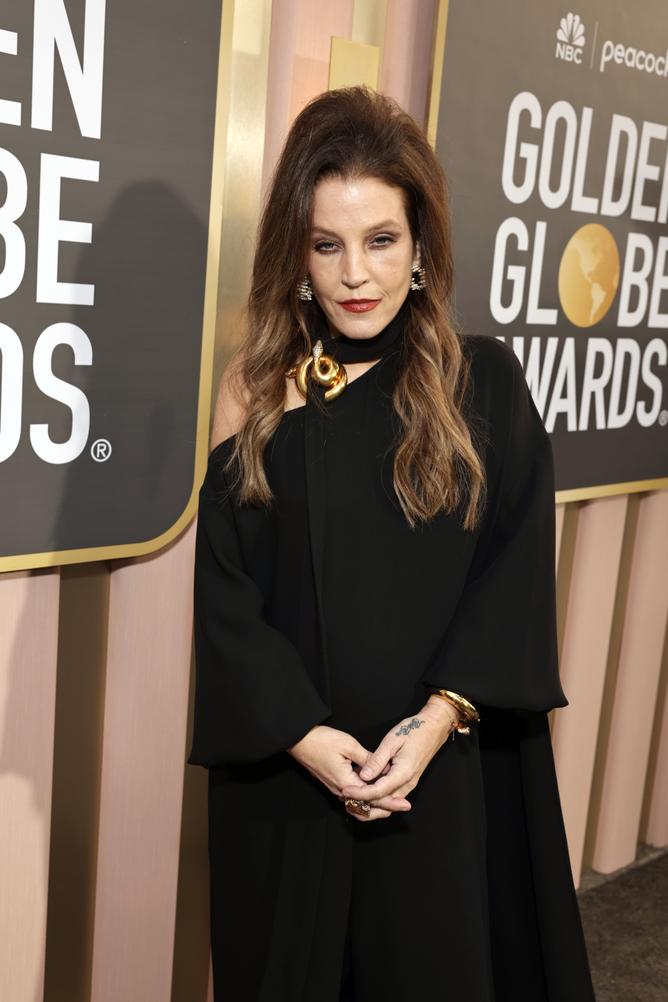 Elvis and Priscilla Presley’s only child, Lisa Marie Presley, died of cardiac arrest on January 12 at the age of 54, startling admirers after her recent appearance at the Golden Globes.

Although the red carpet of the 2023 Golden Globes would be her last, the mother of four provided a number of memorable looks over the years.

The singer-songwriter knew how to make a fashion statement, whether she wore a crop top and bell bottoms during her Nicolas Cage heyday or an elegant black gown to the 2005 Golden Globes.

While she typically wore black and white, she occasionally added a splash of color, like with the sparkly flares noted above or the 2005 cream dress adorned with an orange flower.

Below, we recall some of Lisa Marie Presley’s most memorable red carpet appearances.

Presley wore a glamorous gown at the 1999 Vanity Fair gala, teaming her strapless dress with a satin wrap and a choker necklace (plus plenty of piecey strands hanging out of her updo).

The actress, who would marry Nicolas Cage a year later, accompanied her then-partner on the red carpet in arguably her most famous ensemble, a plunging beaded gown with a transparent bottom and Marilyn Monroe-inspired hair.

In 2001, Presley and Cage attended an art event honoring the works of Bryten Goss while wearing coordinating retro-style clothes; the singer’s low-waisted, sparkly flares were the perfect complement to a sensual white button-down.

At the 2005 Grammy Awards, the daughter of Elvis wore a revised version of her long black beaded dress, sporting a shorter silhouette with sheer three-quarter sleeves and flapper-style beading. 2005 MusiCares Person Of The Year Awards

In 2005, when she attended an event honoring Brian Wilson, Presley stunned in a low-cut, lace-trimmed cream dress with an orange flower at her waist and gold sandals.

At the 2005 Golden Globes, where she presented an award onstage alongside Usher, she donned a black gown with beaded design at the center, coupled with a very glamorous cape.

Actors, musicians, and celebrities who passed away in 2023

“Part One of Harry Potter and the Deathly Hallows: Premiere, 2010”

In 2010, she and her then-husband Michael Lockwood attended the opening of the seventh and final “Harry Potter” film wearing plunging white lace.

At the 2012 Billboard Music Awards, Presley wore a gown with tiers of ruffles, paired with her typical black in the shape of a jacket and a bouncy blowout.

Lisa Marie and her mother Priscilla Presley coordinated in black and white while attending the opening ceremony for an Elvis exhibition in Las Vegas.