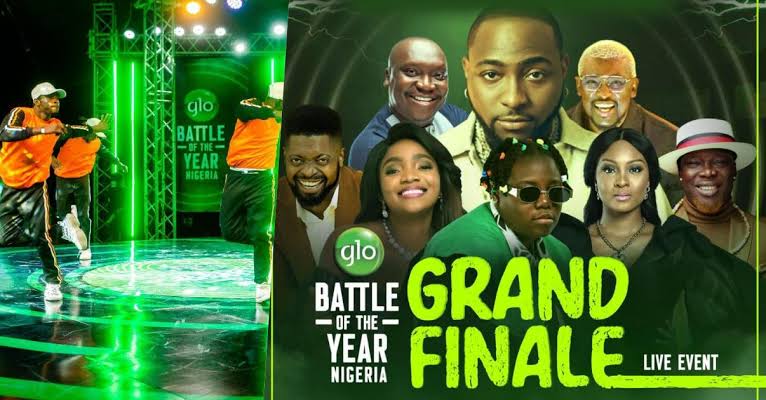 Nigerian David Adeleke aka Davido, Teni Makanaki and Simi shone thrilled fans when they took the ‘Glo Battle of The Year’ stage at different level of entertainment lovers and guests at the finale on Saturday.

Teni Makanaki was the first act of the night.The beefy singer entertained the live audience with a mix of her hit songs.

As the Bgirls group showcased their talent, songstress, Simi, appeared on the stage to thrill the audience with the rendition of her hit single ‘Woman.’

The Guests of the Glo Battle of The Year finale, were treated to an evening of dance, music, and comedy as Globacom held the Nigeria National Finals.

The mega live event attracted dance lovers at the venue anticipating an evening of unlimited entertainment hours before the show officially began.

Davido was the biggest artist of the night, who arrived on the stage in a boisterous mood.

Kicking off his performance with some of his old tunes, the Nigerian 29-year-old singer left the audience asking for more after about 20minutes of performance.

On the list of winners is the ‘619 crew’ with a prize of N9m and a Toyota Hiace bus valued at over N25m.

The Afro Dance segment, Israel Monday emerged the winner and smiled home with N1.5m while Angela Anthony came second with a prize of N750,000.

In the same vein, the Popping category had Isibo David Odigie emerging winner to smile home with the sum of N1.5m while Akhigbe Richard came second and got prize money of N750,000.

The Locking category, Michael Olanrewaju won to get prize money of N1.5m while Odoh Emmanuel came second to get a sum of N750,000 as prize money.

While the Krump category had Charles Ekwem emerging winner to go home with N1.5m and Gifty Ephraim coming second with N750,000 prize money.