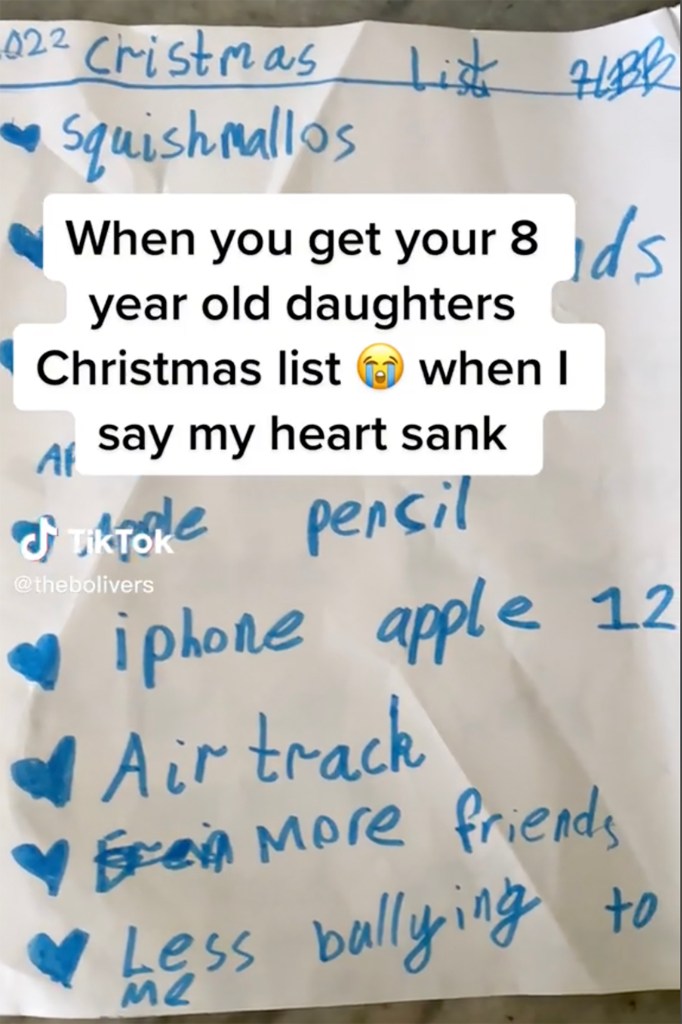 Her one Christmas wish is for more friends.

The list contained common requests such as Squishmallows, an Apple Pencil, and an iPhone, but at the bottom, the girl requested “more friends” and “less bullying to me.”

Boliver shared the list in a video to TikTok, which already has 3.8 million views and 201,300 likes, although she admitted she was initially reluctant to publish it.

She stated in the caption, “I wasn’t going to upload this, but you know what… this is being 8 years old in 2022, and maybe we should be talking about it.”

The mother stated that her “heart sunk,” and the commenters echoed her sentiments.

“As a primary school educator, this hurts my heart,” remarked one commenter.

“We must take action against bullying. Someone person said, “We are taking far too long.”

“This makes my heart ache,” remarked another.

“This makes me not even want to put my children to public school. So sad,” someone commented.

At the bottom of her Christmas wish list, the kid requested “more friends” and “less bullying to me.”
TikTok

“I was moved to tears. My daughter is eight years old. This would break my heart, remarked a parent.

“This is quite tragic. I feel you. “There is nothing more difficult than watching your children through such debris,” observed one person.

Other parents described the heartbreaking items they discovered on their children’s wish lists.

“This year, my 9-year-old daughter wrote ‘To be lovely,’ and I have no words for my sadness,” someone posted.

Suzy Boliver claimed she had no intention of sharing her daughter’s Christmas wish list.

Another person remarked, “My 7-year-old brother wrote that he wanted his girlfriend back.”

One individual suggested, “You should set up a PO Box so that we may mail her postcards from friends around the country.”

“My 7-year-old would love to be a pen pal,” chimed in another.

The mother commented, “I wasn’t going to post this, but you know what… this is 8 years old in 2022, and maybe we should discuss it.”

“Directly proceed to the school. Ask questions. Get to the bottom of this situation. “Be that mother bear,” someone said.

“I’m a teacher, and if she is writing about it, you should ask the instructor about it, but you should also relocate her away from bullies regardless. “Too many little lives were lost,” said another.