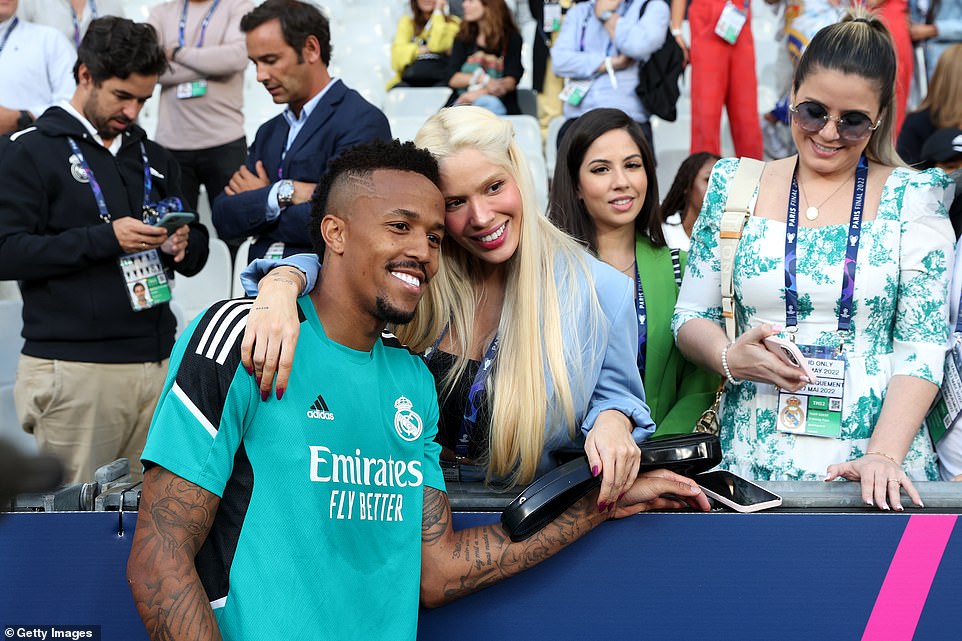 Liverpool’s wives and girlfriends were spotted standing by the Eiffel Tower in Paris ahead of their Champions League final versus Real Madrid tonight.

Real Madrid and Liverpool players’ girlfriends and wives have arrived in Paris to support their teammates before the match begins tonight at 8 p.m.

Julia Vigas, who is married to Liverpool’s Thiago Alcântara, and brunette beauty and Instagram star Gera Ponce, who is dating Luis Diaz, posed for a lovely photo in front of the Eiffel Tower in a club shirt.

The Reds are looking for their seventh win in the competition, while Real, who are the most successful team in Champions League history, will hope to add to their 13 titles.

Mother-of-three Mrs Becker, a doctor, met the Liverpool goalkeeper for the first time in 2012 in their homeland Brazil, and brought their children to the game.

She’ll be there to support her goalkeeper husband, who played a key role in Liverpool’s Champions League and Premier League victories in 2019 and 2020.

Julia Vigas, Thiago Alcantara’s wife, who is focused on operating her family’s hotel business, also brought her children to Paris for the match.

She took a lot of photos in front of the most iconic landmark in Paris before boarding a Virgin Atlantic flight.

Saffron Khan, 20, who has been dating Liverpool’s Curtis Jones since 2019, also shared a video of herself boarding an aircraft and a video of the Eiffel Tower in the lead up to the match.

The attractive model, who is represented by M Models Management, frequently posts photos of her expensive vacations and lifestyle to her 40k Instagram followers.

Israeli model Mishel Gerzig, 25, who met Real Madrid’s Thiabaut Courtois through Instagram, may have stolen the spotlight as she posed for a kiss with her boyfriend in front of photographers in the stands.

Gerzig was sitting matchside when she was captured embracing Courtois while holding his neck as he was doing an open training session at Stade de France yesterday.

The model, who regularly shares snaps of her photoshoots with her 430k followers on Instagram, is signed to Itm Models.

She is also very vocal about supporter Belgian Courtois – and is a regular visitor to his games for Real.

Brazilian influencer Karoline Lima, 26, has been regularly blogging about the her arrival and the match all day since she stepped off the plane to her over two million followers on Instagram.

She is the girlfriend of Real Madrid’s Eder Militao and is previously been romantically linked with Paris Saint-Germain forward Neymar.