Skip to content
Home » News » News » Video: Girl, 3, rescued from monkey which tried to abduct her in China 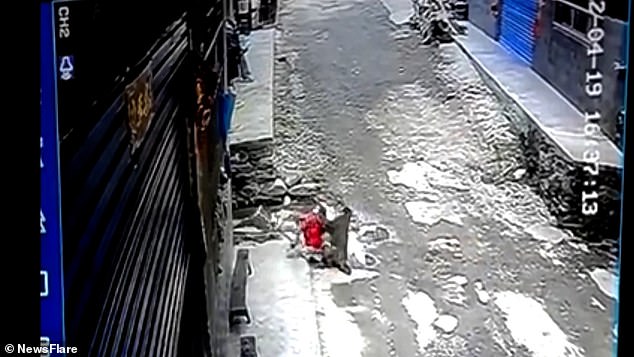 The is the terrifying moment a monkey leaps at a three-year-old girl playing in the street before dragging her down a dark alleyway.

Eerie video shows the tiny primate pounce at the toddler in a village near Chongqing, southwestern China on Tuesday afternoon.

The little girl was playing alone on her scooter in the quiet street before the monkey crawled up to her, grabbed her head and viciously pulled her into the alley where it came from.

Thankfully a grown-up passerby spotted the attempted kidnapping and chased the monkey down the street before saving the child.

But the three-year-old was left with a scar on her head – and a horrible memory she won’t forget.

Local officials tied the monkey to numerous other attacks in the local area, according to the Global Times.

This was its first attack on a child.

The girl’s mother said she had been cooking inside. A neighbour then told Mrs Liu what happened and she checked surveillance footage.

Her daughter was taken to hospital for treatment and a vaccination.

Police were unable to catch the monkey, which came from nearby mountains.

Once caught, cops said it will be handed in to the wild animal protection agency.