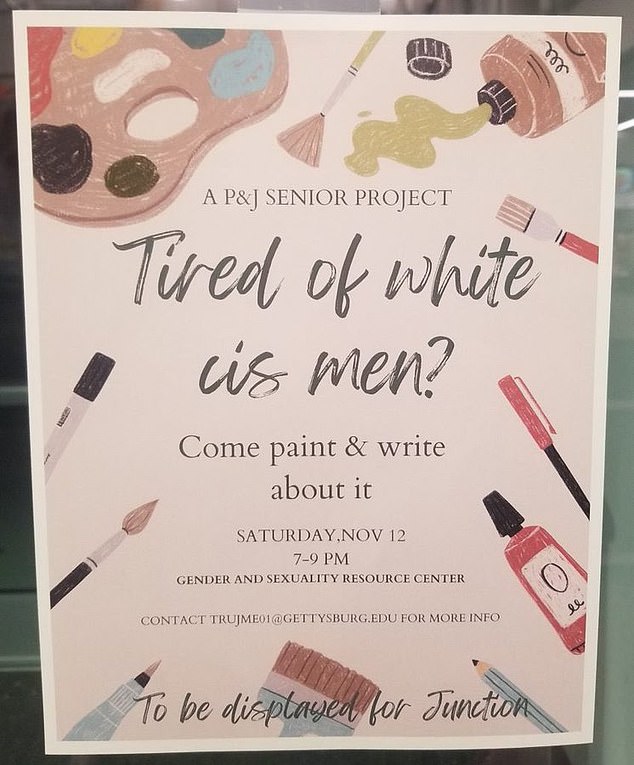 Gettysburg College has postponed an event for individuals who are “Tired of White cis men” after receiving severe criticism from students and alumni.

The painting and writing event presented by the Gender Sexuality and Resource Center at the private Pennsylvania institution was originally set for November 12.

When the poster advertising the event began to circulate online, however, the school got a barrage of complaints from students and was compelled to cancel the event.

The event was part of the college’s peace and justice senior project, or “Pwou&J,” and the artwork made will be displayed in the dining hall.

It comes only weeks after the college received many complaints in response to a drag show held in the heart of campus.

The Gettysburg College Gender Sexuality and Resource Center has postponed a painting and writing event for persons who are “Tired of White cis men” due to student criticism.

According to the website, these activities are organized by the college’s Gender and Sexuality Resource Center, which “provides a space for community, support, advocacy, resources, learning, and celebration of identity.”

Its aim is to guarantee that every member of the Gettysburg College campus community has access to gender and sexuality-related information. We seek to foster a culture of support on campus in which every individual feels secure and free to be themselves.

However, a current Gettysburg College student told Fox News Digital that messaging on posters of this sort is typically more inclusive and friendly to the targeted student groups. However, this discourse is divisive.

The student went on to say, “The faculty on college always promotes unity among students on campus, yet they never move to implement this togetherness.”

The student, who is a senior, also told Fox that he or she is “not at all surprised that a poster like this is circulated throughout the college, given that there was a public drag show in the middle of campus three or four weeks previously.”

The drag show was one of several activities organized in response to Dr. Ryan T. Anderson’s speech last month. An LGBTQ+ social hour, a ‘celebration’ of a drag act, and a protest sign-making session preceded Anderson’s lecture, which was followed by a barbeque meal hosted by the Gender and Sexuality Resource Center.

‘Typically, messaging on posters of this sort is more inclusive and friendly to the targeted student groups,’ the student stated of the postponed painting and writing session.

The student stated, “However, this rhetoric is polarizing.” The faculty on campus always promotes togetherness among the students but never takes action to implement this oneness.

The senior said, “The school should not permit this type of discourse because it blatantly and brazenly contradicts what the college claims to seek from its student body.”

The event was part of the peace and justice (‘P&J’) senior project at Gettysburg College, and the artwork made will be displayed in the school dining hall (pictured)

Typically, messaging on posters of this kind is more inclusive and friendly to the targeted student groups, as one student told Fox News Digital. However, this discourse is merely divisive.

This ‘incident, like many others that have occurred at Gettysburg College,’ the student said,’makes me feel as if the school is incompetent’ and that the’school no longer allows students to speak freely; they only allow ideas and concerns of students to be heard if they align with the ideas that the school would like to promote.’

The student continued, “The institution does not have an adequate understanding of how students genuinely feel about the college.” Most are upset and disheartened by the fact that the school is improving, not just as a result of this incident, but also as a result of many other incidents that have occurred previously.

Hello @gettysburg, our son will not be applying at this time. Her tweet was followed by a clown face emoji.

Can they tell me what cis means and whether I should pretend to be shocked by this? Also – adding #GettysburgCollege to my ‘and your resume is placed in the do not bother interviewing’ folder.

One Gettysburg graduate told Fox News Digital that he was offended by the event and that as a ‘White, cis man, the notion that basically individuals are being permitted to discriminate based on sexuality and ethnicity was never taught to me in Gettysburg’

Even as a conservative, Gettysburg always strived for diversity, equity, and inclusion, but in a positive way, so that conservatives and liberals could have meaningful conversations. You may have such scholarly discourse at a liberal arts college.

‘I hope students embrace this as a learning opportunity and push back on some of this wokeness you’ve witnessed, because the primary purpose of education should be to teach the next generation and ensure that we have a society that continues to function and think critically,’ he said.