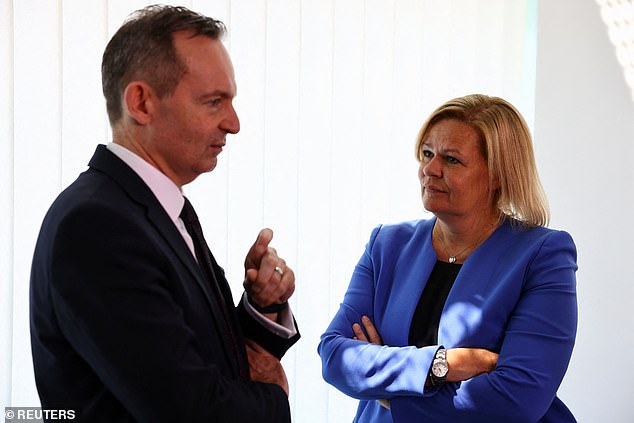 To help ease airport turmoil brought on by a dearth of labor, German officials intend to expedite the entry of refugees from Turkey.

A number of lawmakers have stated that the staff shortages the German aviation industry is facing can be alleviated by promptly issuing residence and employment permits to migrants.

The involved ministers emphasized that background checks and safety measures would not be compromised.

They said that they would “act pragmatically” if it turned out that migrant workers were being mistreated or living in substandard housing.

Similar to the UK, Germany has experienced overcrowding and understaffing at airports, with the epidemic being held responsible.

German Transport Minister Wissing anticipates that this plan will address the issue of competent people leaving or being fired due to the pandemic.

Migrants from Turkey may soon fill positions such as baggage handling and check-ins, which the minister believes can be promptly filled.

The ministers reaffirmed that safety would come first, that fair salaries would be provided, and that the employment was not transient.

At the start of the news conference, Transport Minister Volker Wissing stated: “This is a problem we have across Europe.

Because we observe people’s displeasure, we are quite concerned about this.

The organizations that plan ground management and the area of security checks are lacking in specialists.

It’s a challenging subject since the trained professionals that the public sector lost to the pandemic can only be replaced by the private sector.

Nancy Faeser, federal minister of the interior, declared: “We will enable businesses to use auxiliary workers from overseas, particularly from Turkey.”

The required work and residency licenses will be issued right away. This has already been approved by my employer.

The assistants would then “go through the same thorough background checks as everyone else” and may “be utilized for baggage handling, for example,” according to Faeser.

“There are no compromises when it comes to safety,” Faeser stated.

We are confident that the dependability tests conducted by the federal states will take all step possible to ensure that this can be done rapidly because the public cannot be expected to do that either.

Hubertus Heil, the minister of labor for the federal government, claimed that the situation was especially difficult because “many workers are genuinely looking forward to their holiday following a lengthy Coronavirus season.”

The minister also stated that there would be no temporary employment. According to Heil, “The corporations will have to hire the workers directly.”

The government will also make sure that “wage dumping is not an issue” and that “wage payments are made in accordance with tariffs.”

Heil warned the companies in his announcement that state authorities would act pragmatically and determine whether migrants were being received humanely.

While experiencing the same issues as Germany, the Netherlands, Denmark, and Sweden, UK airlines frequently attribute some of the issue on Brexit.

Airlines have requested Grant Shapps, the Transport Secretary, temporarily relax immigration laws following the Brexit so they can similarly access the availability of competent personnel in Europe.

The administration, however, rejected the idea and attributed the persisting issues to the sector’s failure to make adequate plans.

During the pandemic, carriers cut thousands of employees, which resulted in hundreds of flights being delayed or cancelled, long lines forming at airports, and passengers having to wait four hours or longer for their bags.

Since carriers cut thousands of positions during the epidemic, staff shortages have been a major contributor to the issues.

Jet2 was forced to refute rumors that its CEO Stephen Heapy attributed hiring problems to “lazy Brits who live off benefits and sit on their arses.”

The airline acknowledged that hiring new employees was becoming more challenging as a result of Brexit.

In a dispute over salary last week, more than 700 Heathrow check-in and ground-handling employees decided to take industrial action, which could make the situation worse.

The beginning of the summer break, on or around July 22, is when the GMB and Unite unions anticipate going on strike.