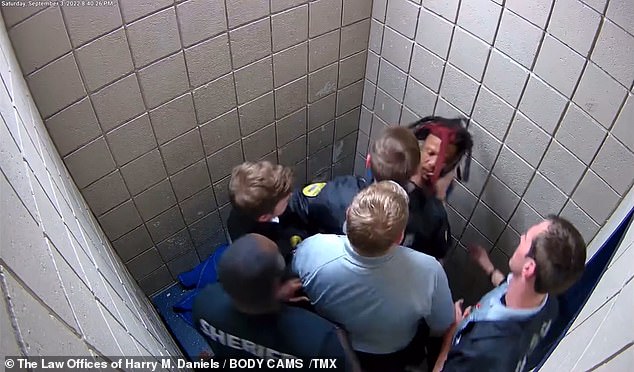 A Georgia jail’s surveillance film shows a black inmate being beaten by five guards at once.

Monday, an attorney for Jarrett Hobbs, 41, revealed a video shot inside the Camden County Jail, prompting the Sheriff to announce the launch of an internal investigation.

Sheriff Jim Proctor stated that he and others of his command had seen the footage and ordered an investigation to be opened ‘immediately’ The office did not provide any other details regarding the attack.

But human rights attorney Harry Daniels said the sheriff’s deputies who surrounded Hobbs and repeatedly punched him in the head and neck should face criminal prosecution.

Daniels stated, “It is indisputable that Mr. Hobbs was assaulted, hit many times in the back of the head, kneed in the head, and dragged out of his cell by jailers.”

A representative for the office declined to comment on whether the deputies are currently on duty.

Jarrett Hobbs is depicted in his Camden County detention cell as sheriff’s deputies approach him and begin to physically assault him. Hobbs was arrested on many charges at the beginning of September.

Jarrett Hobbs, 41, was arrested in Georgia for speeding, driving with a revoked or suspended license, and unlawful narcotics possession.

Harry Daniels, an attorney for civil rights, represents Jarrett Hobbs. He posted a recording of his client being beaten by deputies in a detention cell and urged authorities to file criminal charges against the deputies.

After the video attracted widespread attention, the Sheriff’s Office announced it would ‘immediately’ launch an investigation into what transpired during the altercation between the detainee and the jailers.

A video still depicts the first sheriff’s deputy entering Hobbs’ cell. Hobbs was instructed to stop banging on his cell door, but according to the records, he continued to do so.

Federal court papers indicate that the jailers entered Hobbs’ cell because he was continuously kicking the door and refusing to stop despite being asked to stop.

In the footage, Hobbs is seen standing alone in his cell by the entrance before going toward the bed and picking up two items. His counsel stated that the items were a piece of paper and a sandwich.

The guard then grabs Hobbs by the neck and attempts to force him into a corner. Then, four additional guards follow.

As the guards attempt to restrain Hobbs by his wrists, one of them begins to punch him in the back of the head and on the neck. Other guards also throw punches.

On September 3, Hobbs was initially charged with narcotics possession and traffic offences. The individual was released from the Camden County jail on September 30.

Daniels wondered intently why the office had not initiated an investigation sooner. Hobbs was charged with assaulting the deputies on the day that the violent altercation happened, which occurred over two months ago.

Daniels was the one who disclosed the video to the public.

Hobbs, who resides in Greensboro, North Carolina, was detained in coastal Camden County on September 3. He was arrested for speeding, driving with a suspended or revoked license, and possession of a controlled substance.

Hobbs was on probation after a 2014 conviction in North Carolina. He pleaded guilty to the allegation of bank and wire fraud conspiracy.

A second video depicts Hobbs being pulled into the hallway of the jail and thrown against the wall.

From September 3 through September 30, Jarrett Hobbs was imprisoned at the Camden County Jail before being transported back to North Carolina.

Hobbs is currently back in North Carolina, where he was on probation on a 2014 count of bank and wire fraud conspiracy.

The Associated Press reports that a second footage from a camera outside the cell shows the jailers carrying the offender through the cell door and hurling him against the wall. The conflict lasts around one minute.

The order states, “One deputy had a broken hand as a result of the event.”

Daniels stated that the guard with the fractured hand sustained an injury when he struck a wall while swinging at Hobbs.

On November 7, a federal judge in North Carolina revoked Hobbs’ probation after it became evident that he had violated the conditions of his supervised release. The court subsequently dismissed the claimed probation violations based on the Georgia struggle with deputies, but did not specify why.

Hobbs is now being held in jail in North Carolina.

Daniels stated that his client’s “physical wounds” have “healed to the best of their ability.”

However, mentally, no. He believed he was going to die,’ he continued.