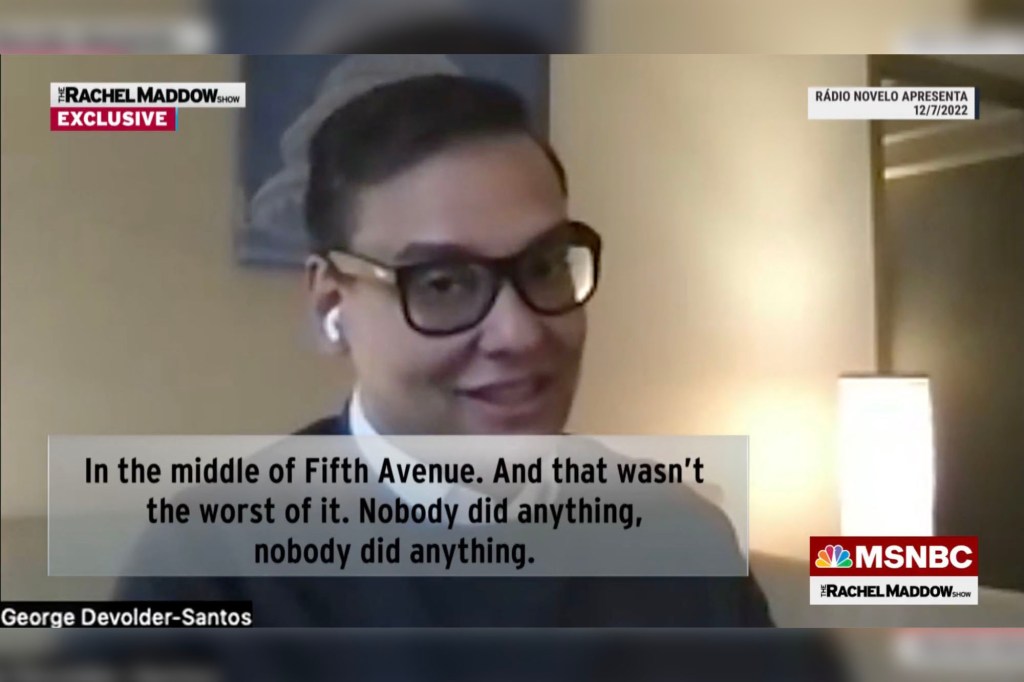 Rep. George Santos, a serial liar and Republican from Long Island who has manufactured most of his biography, claimed in a recently found podcast conversation that he survived a “assassination attempt” and had his shoes stolen in the middle of Fifth Avenue.

During a December virtual interview with a Brazilian podcast, the known liar made a series of outlandish claims, which were translated from Portuguese by MSNBC’s “The Rachel Maddow Show” and broadcast on Monday.

“We have already endured an attempt on my life, an assassination attempt, a threatening letter, and a police escort in front of our home,” said Santos, who was previously known as Anthony Devolder and was introduced on the show as George Santos-Devolder.

On Monday, “The Rachel Maddow Show” on MSNBC broadcast portions of a podcast interview in which George Santos portrayed himself as the victim of many crimes.
MSNBC

The freshman congressman of Brazilian heritage, who previously claimed he was “Jewish” and the descendant of Holocaust survivors, asserted that he had been the victim of many crimes over the years, including a “attempted assassination.”

He further stated that when he and his husband returned from a New Year’s Eve party in Florida in 2021, they discovered their home had been vandalized in a politically motivated attack.

In addition, he claimed he was robbed in the middle of Fifth Avenue by two white men who stole his sneakers.
MSNBC

He stated, “It was vandalized because we were at a Republican party.”

Later in the conversation, Santos described being robbed by two individuals in the middle of Fifth Avenue in New York City during the summer of 2021.

On a podcast, Santos stated, “Before asking any questions, they (the robbers) were neither black nor even white, but they robbed me, stole my briefcase, shoes, and watch.” “This occurred in broad daylight.” It was 15:00. As I was leaving my office, entering the garage, and retrieving my vehicle, I was mugged.”

The worst aspect of the robbery, according to Santos, was that “no one did anything.”

The serial liar has lied about many aspects of his life, including his education, employment history, and ancestry.
REUTERS

“The fear is genuine,” he continued. It is unbelievable what we endure here.

Maddow stated on Monday night’s broadcast that the hosts of the Brazilian podcast sought Santos — aka Devolder — for a copy of a police report documenting his alleged crime, but received no answer.

Since flipping a Democrat-held seat in November, Santos has been embroiled in a seemingly ever-expanding web of falsehoods, scandals, and investigations ranging from his dodgy finances to his equally shady record and mysterious heritage.

The newly elected Republican congressman was discovered to have fabricated his college education at Baruch College and NYU, his employment history at top Wall Street firms, his family heritage, and even the circumstances surrounding his mother’s death, which he claimed were related to the 9/11 attacks.

On January 7, people in Queens demonstrate against Representative Santos.
REUTERS

Despite his repeated denials, Santos was caught in yet another deception this week when it was revealed that in 2008 he appeared as a “drag queen” named Kitara Ravache in Brazil.

After a former friend from Brazil shared a photo of Santos in a glittery red dress and wig, the openly gay Santos finally acknowledged to cross-dressing, but said he was not a drag queen and was merely having fun at a festival.

Despite increasing calls from both Democrats and Republicans for Santos’ resignation over his never-ending list of falsehoods, the freshman member has categorically refused to resign and has instead been appointed to two House committees.