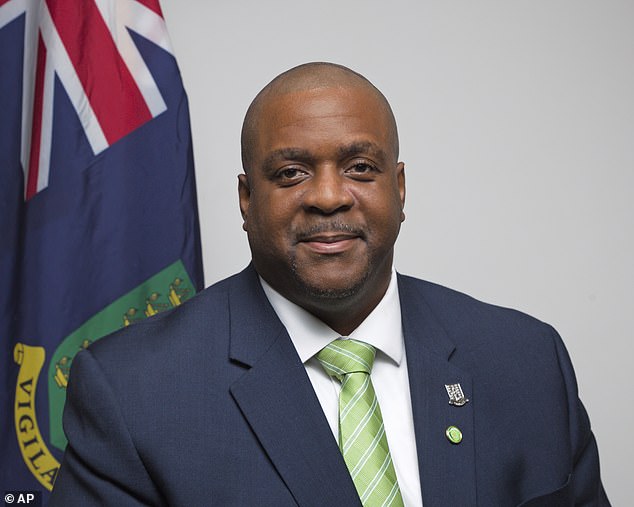 The sonorous Tory MP and handsomely paid barrister Sir Geoffrey Cox has worked hard representing the government of the British Virgin Islands, which is beset with allegations of cronyism and misuse of public money.

But yesterday that lucrative job, which cemented Cox’s position as Britain’s highest-earning MP – and saw him escape lockeddown Britain for a luxury villa in the tropical sun – became a little more interesting.

For the premier of the BVI, Andrew Fahie, sensationally faces multi-million dollar drug smuggling and money laundering charges in the US.

The director of the BVI’s ports, Oleanvine Maynard, and her son Kadeem, were also arrested and charged.

Mr Fahie’s arrest came just a day before a British inquiry into corruption allegations published its own damning findings, recommending a two-year suspension of the BVI constitution and direct rule by the UK-appointed governor.

‘The people of the BVI have been badly served in recent years. Very badly indeed,’ it said.

But the end of his rule looks like the least of Mr Fahie’s problems.

The 19-page prosecution statement released in Florida reads like a script for a Hollywood thriller, with speedboats, shell companies, Lebanese Hezbollah operatives and an undercover agent posing as a Mexican cartel member.

And at the centre is Mr Fahie, a controversial and polarising politician who, prosecutors say, demanded an upfront payment of $500,000 in cash for helping to smuggle cocaine to Miami and New York, while also complaining to an undercover agent that Britain ‘didn’t pay him much’.

The BVI’s governor, John Rankin, said ‘I realise this will be shocking news for people in the territory’, stressing the US allegations were unconnected with UK commission’s investigation.

However, behind the official horror at the alleged activities of a man elected to govern some 30,000 British citizens, there’s likely to be grim satisfaction in Whitehall at the plight of a Caribbean politician who has been accused of stoking anti-British feeling for political advantage.

Mr Jaspert said he’d discovered evidence suggesting corruption that stretched to the top of the BVI government and even possible involvement with drug traffickers.

US prosecutors maintain that Mr Fahie was brought into the criminal conspiracy after an undercover DEA agent met a group of self-proclaimed members of Lebanon’s terror group Hezbollah on the BVI island of Tortola in late 2021.

The agent, posing as a member of the powerful Sinaloa drug cartel, claimed he needed help moving thousands of kilograms of cocaine from Colombia through Tortola, then laundering the proceeds.

The agent met the latter first, and it is alleged that after he outlined his plan, she told him she was confident Mr Fahie would come on board.

‘You see with my premier, he’s a little crook sometimes… he’s not always straight’, Mrs Maynard allegedly told the agent in a recording.

She and her son Kadeem later said they’d spoken to Mr Fahie, who said he would ‘handle the ports and airports’ but demanded a $500,000 initial payment.

He later asked for an extra $38,000 in cash to repay a debt to a mystery Senegalese man who had ‘fixed’ political issues for him.

Mrs Maynard also said Mr Fahie, who was ‘skittish’ because of the UK inquiry, had given her ‘code words’ to use when discussing the plan when they met in Tortola earlier this month, Mr Fahie allegedly told the undercover agent he was worried about being caught, saying: ‘It took me 20 years to get here and I don’t want to leave in 20 minutes.’

They drove together to a meeting at a ‘large, very nice, stone house’, with Mr Fahie complaining during the journey ‘that the British didn’t pay him much’.

The agent told Mr Fahie his cartel wanted to use Tortola ports to transport 3,000kg of cocaine per shipment.

The drugs would be hidden inside 5kg buckets of water-proofing paint, court papers say.

Mr Fahie and Mrs Maynard were allegedly offered 12 per cent of the value of the cocaine sold in America, whereupon the premier pulled out a calculator and worked out that the total would come to $78million, making their cut worth more than $9million.

The agent said he was told that secretive BVI shell companies – of which there are more than 370,000 – could be used to conceal criminal proceeds.

According to prosecutors, the undercover agent also offered to help fund Mr Fahie’s reelection campaign and asked him to allow him to ‘have a hand’ in choosing Mr Fahie’s successor ‘to ensure the continuity of their drug operations’.

He also unveiled a plan to allow BVI police to start occasionally seizing low-quality ‘brown’ cocaine and money to ‘make it look like Mr Fahie was fighting drug-trafficking’.

According to the court papers, Mr Fahie laughed and told him he had ‘thought of everything’.

However, the premier was still suspicious and needed reassurance the other man wasn’t an undercover agent.

Mr Fahie said ‘the British had been trying for years to get him out of office,’ court papers say.

According to the agent, it was agreed that Kadeem would ferry the first shipment in from the neighbouring island of St Thomas in the US Virgin Islands in his speedboat.

His mother explained how they used a corrupt private jet company to bring in drug money.

On Wednesday, the conspiracy allegedly moved to Miami, where the parties met in a hotel and ironed out final details and money arrangements.

Mr Fahie, who said he had a friend involved in ‘moving guns and cocaine’, also disclosed that he ‘believed in magic and witches, and how to read lies in people’, prosecutors say.

The following day, it is alleged, the informant took Mr Fahie to the airport and ushered him on to a supposedly BVI-bound private jet containing $700,000 for him and Mrs Maynard that had been put into ‘designer shopping bags’.

As they left the plane, Mr Fahie was arrested, reportedly asking: ‘Why am I getting arrested, I don’t have any money or drugs?’

As Mr Fahie cools his heels in a US jail cell, his lawyer, Tory politician Sir Geoffrey, moved swiftly yesterday to distance himself from Mr Fahie and to stress that he was not advising him in the US.

The MP for Torridge and West Devon, who was paid more than £1million last year to work as a lawyer for clients including the BVI government, caused outrage after it emerged that, as the rest of the UK lived under Covid lockdown, he flew to the Caribbean and was put up at a £3.1million villa overlooking a secluded bay.

Although Cox was referred to the Commons anti-sleaze watchdog, he denied breaking the rules and it was decided last December that he would not be investigated.

The former Attorney General’s role in advising a controversial administration as it tried to defend itself against allegations from his own Tory Government did him no favours.

Yesterday, he released a statement insisting that Mr Fahie ‘is not and has never been my client’.

Instead, he said he was instructed by solicitors Withers to advise various BVI government ministries – including the office of the premier – in connection with a public inquiry that at the time involved ‘no criminal charges of any kind’.

And he reiterated that while a barrister’s job was to give objective legal advice and representation, ‘it implies neither approval nor disapproval of his clients’ conduct’.

The drugs charges will come as little surprise to islands where locals say cocaine-smuggling is rampant and often carried out by those who should be fighting it.

In late 2020, BVI police raided the Tortola home of a fellow officer and found more than £180million worth of cocaine – 2.3 tons, reportedly the largest land-based cocaine seizure in British history.