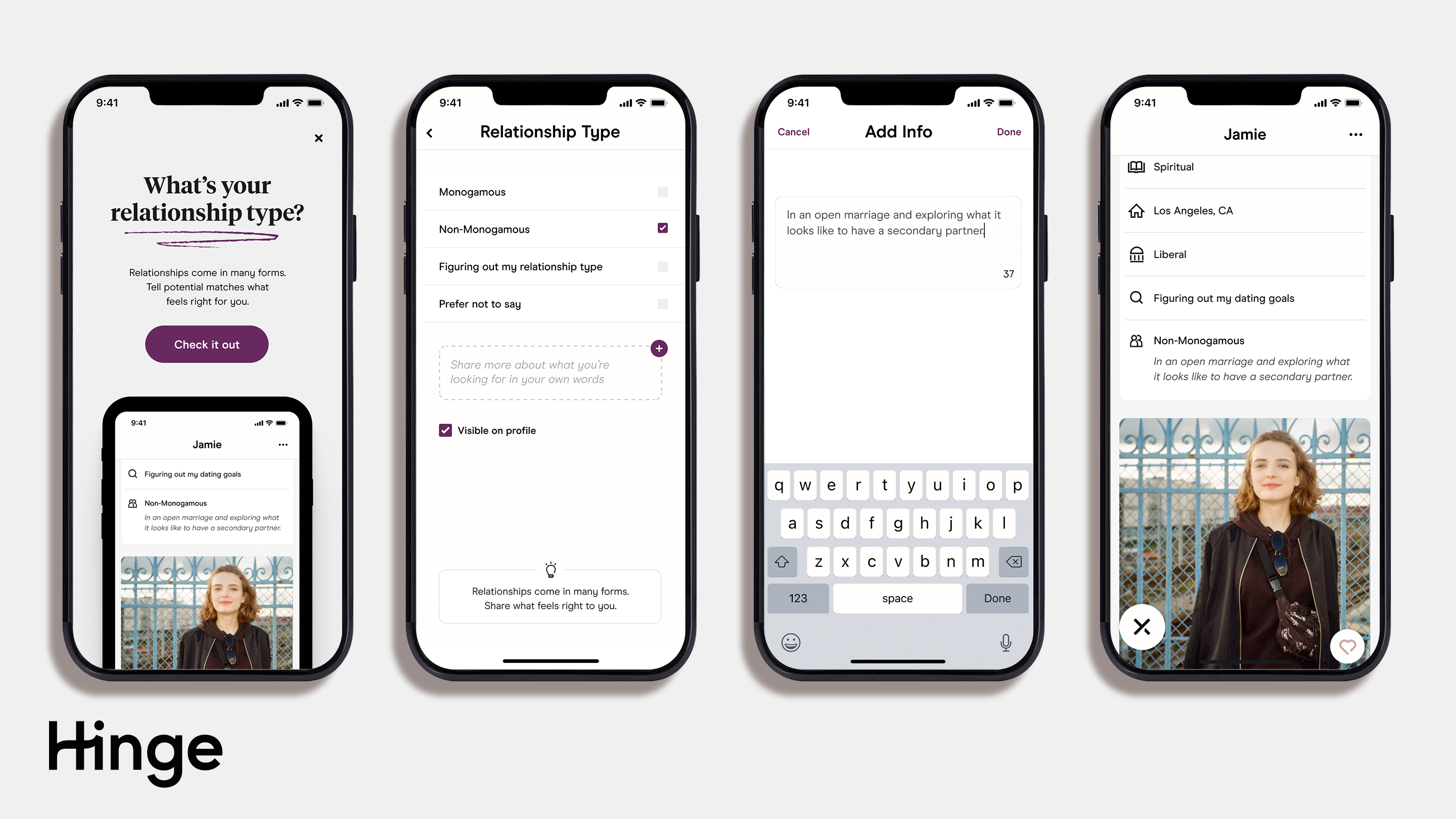 One dating app has taken a significant stride forward with the addition of a new function to accommodate a developing relationship pattern that has lately been in the news due to Abbie Chatfield.

Hinge included a “relationship type” feature that allows users to disclose whether they are looking for or in a non-monogamous relationship, seeking monogamy, or are unclear of what they are comfortable with.

The new function is associated with information such as your age and profession.

At this time, users cannot utilize this tool to exclude matches based on relationship type, as they do with sexual orientation and age.

Despite the fact that an astounding 86% of individuals profess to desire monogamous relationships, the LGBTQIA+ community and Generation Z are embracing this dating style, also known as ENM or polyamory.

The concept that both parties in a relationship experience romantic or sexual attraction to more than one person and act upon it is fundamental to this relationship style.

The director of relationship science at Hinge, Logan Ury, told news.com.au that there are numerous misconceptions regarding non-monogamy, such as the notion that it implies cheating or that those who practice it have commitment issues.

She noted that just because you are in this type of relationship does not mean you cannot cheat; there are rules and limitations in every relationship.

Ury stated that before engaging on non-monogamy, clear boundaries and study were necessary.

“Explore the reasons behind your interest in non-monogamy. She told news.com.au that the foundation of successful and healthy non-monogamous partnerships is honesty.

“You must be able to speak with your partner from the start about what you’re comfortable with, your boundaries, and how you’ll manage future breaches of trust, etc. Begin by addressing why you both are interested in this issue.

“Perhaps both of you wish to explore emotional or physical intimacy with additional individuals. You may be interested in exploring connections with individuals of other genders.

“Fail if your responses sound more like ‘all our friends are doing it’ or ‘this will solve our problems.’

“Non-monogamy is not an efficient means of concealing relationship problems. In fact, it frequently magnifies them.”

She stated that it is necessary to educate yourself by reading books such as Opening Up: A Guide To Creating & Sustaining Open Relationships, as well as speaking with others you know who are practicing, prior to beginning.

Ury stated that it is essential to establish what non-monogamy means to you.

“For some couples, an occasional makeout when one partner is away at a conference is OK, but nothing more. Other couples prohibit sleeping with members of their broader social circle.

“My acquaintance is able to sleep with other individuals, but only once. These rules must be defined in advance.”

She stated that conversations regarding protection, contraception, and the sharing of information regarding your partner’s dating life should also be had.

But ultimately, making time for your primary and having regular check-ins is the key to embarking on a new adventure with them.

Due to celebrities like Chatfield being open and honest about her relationship style with her ex-boyfriend, many people now have a pop culture reference for what non-monogamy looks like.

This, according to Ury, was crucial for the comfort of others.

“When celebrities in non-monogamous relationships share their tales, it inspires vital debates about the ins and outs of these structures,” Logan added.

“It inspires other individuals to explore new possibilities, and find the relationship type that’s appropriate for them.”

While other apps like as OKCupid and Feeld have had features like this, even including an area where you can link profiles with your spouse, Hinge is the first prominent app to accept diverse relationship styles openly.

Ury said a rise in enquiries about non-monogamy led to the app introducing relationship categories.

“At Hinge, we like to think holistically how to serve daters’ various experiences and identities. Ultimately, we want to empower our consumers to find intentional and meaningful relationships,” she stated.

“When you match with someone and find out if one person is searching for monogamy and the other person isn’t, that can be pretty upsetting.

“Our new tool will allow everyone to know at a look on profiles whether the other person has the same relationship goals.”