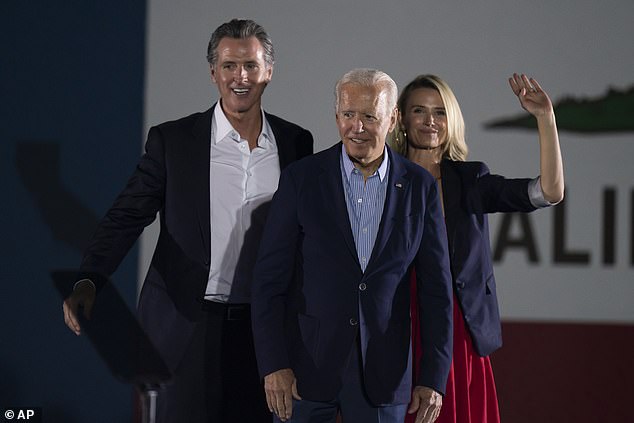 The governor of California has stated that he will not challenge President Biden for the Democratic nomination in 2024, but he has not ruled out a run in 2028.

Newsom disclosed to columnist Jonathan Martin in a new interview with Politico that during a July trip to Washington, D.C., he informed White House officials that he would not run for re-election in 2024.

During an interview on election night, he stated, “I’ve told everyone in the White House, from the chief of staff to the first lady.”

Newsom then reportedly called Biden on election night to relay the same message that he strongly supported the president’s anticipated reelection bid.

Martin overheard Newsom on the phone with Biden saying, “I’m all in; put me in coach.” We’ve got your back.

Biden, who turned 80 on Sunday, spent the Thanksgiving holiday in Nantucket with his family as he deliberates whether to run for president again in 2024.

While Newsom insists he will not challenge the president, a slew of other candidates, including Vice President Kamala Harris, Pete Buttigieg, and Gretchen Whitmer, are poised to launch their campaigns.

The president’s approval rating has been hovering around 40 percent, but he is pleased that his Democrats performed better than expected in the midterm elections.

After his outspoken criticism of Florida Gov. Ron DeSantis and Republican policies on gun rights and abortion, it was widely believed that Newsom would run for president in 2024.

He had also criticized Biden and the Democratic party for their lackluster messaging and described Biden as a man “hard-wired for a different world.”

The governor told Politico that he would not run for president in 2024, even if Biden changes his mind about running for reelection, but he did not rule out a run in 2028.

“It’s frustrating because I have so much reverence and respect for not only the president, but also the vice president, who is an old friend, and we’ve known each other for 25 years,” said Newsom, referring to Vice President Kamala Harris.

This month, Newsom, 55, was reelected to a second term as governor after fending off a recall attempt in 2021.

He targeted national issues such as abortion and immigration in his campaign.

Newsom also distinguished himself by challenging Florida Governor Ron DeSantis and other Republicans on the issue of abortion.

And while he was praised for his strong leadership at the onset of the COVID pandemic, he was criticized when he was caught on camera breaking his own COVID regulations at a dinner. However, he evaded an attempt to recall him after the public’s outrage.

A USA TODAY/Ipsos Poll found that following this month’s midterm elections, the percentage of Democratic voters who believe Biden could win in 2024 increased by double digits, from 60 percent in August to 71 percent now.

Democrats held control of the Senate and, while Republicans won the House, it was not the red wave many expected.

“He not only defeated Trump once, but I believe he can do so again,” Newsom told Politico. I will enthusiastically support him if he runs.

Biden feels the same way. The New York Times reported earlier this week that he routinely reminds people that he is the only person to have defeated Trump, and that he remains confident that he will do so again in 2024.

Biden had previously described himself as a one-term transitional president who would bridge the chaos of the Trump years.

He is the oldest president ever elected and, if he ran and won again in 2024, he would be 86 at the end of a second term.