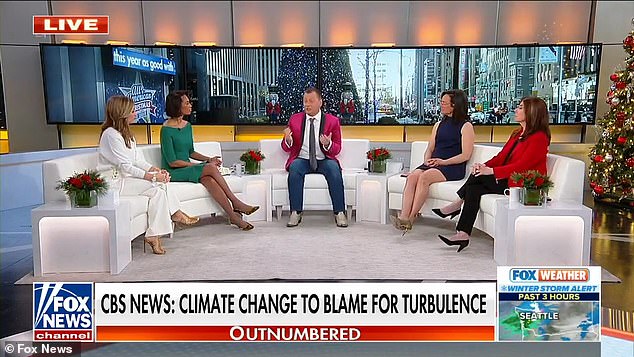 After reporting that flight turbulence is caused by climate change, CBS News has been criticized by Fox News and social media users

After 11 individuals were critically injured on a Hawaiian Airlines aircraft on Sunday, CBS ran an article on Monday explaining the causes of turbulence.

Climate change, according to Taylor Garland, spokeswoman for the Association of Flight Attendants, will increase the frequency of turbulence produced by extreme weather.

On Tuesday, panelists on the Fox News program Outnumbered slammed her assertions and demanded evidence to back them up, following a flood of responses on Twitter.

Dr. Nicole Saphier, a Fox News medical contributor, refuted the allegations of the Flight Attendants Association Union and recommended passengers to use seatbelts.

I do not believe the Flight Attendants Association Union spokesperson should be the climate change czar.

“Turbulence occurs frequently. It has occurred since the invention of flight. And happily, it has improved due to technological advancements aboard flights.

I don’t think we can simply attribute this to climate change, and I think people should, you know, wear seatbelts.

Jimmy Failla, the anchor of Fox Across America, questioned the statistics supporting the assertion that climate change will increase the frequency of extreme turbulence.

Jimmy Failla, host of Fox Across America, questioned the Flight Attendants Association Union’s climate change assertions, inquiring as to the data upon which they were based.

People believe this nonsense because they wish to appear sympathetic and compassionate.

Failla stated, ‘The only facts we have to support climate change is that people are getting rich selling it to us, and none of those people are following any of the standards they’re putting on us.’

“I wish to become a climate activist in order to fly on private jets.” That is the benefit for me.

One stated, “I spilled my coffee this morning due to climate change,” while others replied, “That’s called the weather.”

She stated, “This is a union entity propagating a government-Democrat narrative.”

As long as there is this pliable, Play-Doh-like issue that can become anything they want it to be, more government money will be allocated to unions, which work in all the industries that require it to save people from climate change.

Therefore, it is a vicious circle. It is the norm. She stated that the flight attendants’ union is disgraceful.

The topic was in the news after extreme turbulence on a Hawaiian Airlines flight resulted in 20 hospitalizations, 11 of which were for serious injuries.

As a result of the severity of the turbulence, oxygen masks fell from above.

On Sunday morning, several passengers were observed using neck braces after colliding with the ceiling of the aircraft in which they were riding.

Children can be heard crying in the background of disturbing video footage of the aftermath of the flight, which shows passengers racing to collect luggage that had fallen from overhead bins.

A flight attendant can be heard appealing over the intercom. “Ladies and gentlemen, please pay attention: do we have trained medical personnel on board?” Do we possess any physicians, nurses, or firefighters?

On Sunday, a flight from Phoenix to Honolulu carrying numerous holiday travelers encountered severe turbulence shortly before landing, ejecting passengers from their seats as the plane nosedived.

36 passengers aboard the aircraft received medical attention for knocks, bruises, cuts, and sickness.