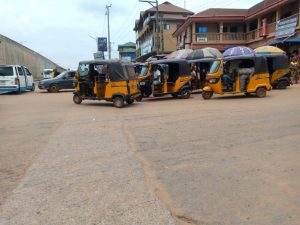 Mr. Irerewuyi disclosed this while discussing with journalists on different engagements of the corps.

Daniel Ezeigwe  reports that while reacting to questions on the proliferation of under aged drivers, especially among tricycle riders in Awka and surrounding towns, Mr. Irerewuyi stated that the corps has strong road use laws, one which puts legal driving age in Nigeria from eighteen years and above.

He said that while mobile courts are always in action to eliminate such cases as most defaulters operate without a valid driver’s license, his office will leave no stone unturned in clearing the roads of both under aged and unlicensed users.

Corps Commander Irerewuyi, who also spoke on the processes to obtaining a driver’s license, which most road users complain are tortuous, said that the whole process has been simplified from the initial phase down to the final stage, with timeline for obtaining a valid license not taking longer than fourteen days after the final process.

He also cautioned on wrong overtaking, revealing that there are so many considerations to look out for before doing so, which are contained in the modified highway code of the Federal Republic of Nigeria.