Skip to content
Go Home «» News «» Breaking News «» From Billie Eilish to Kim Kardashian, 8 of the greatest and most daring ensembles from the 2022 LACMA Art+Film Gala 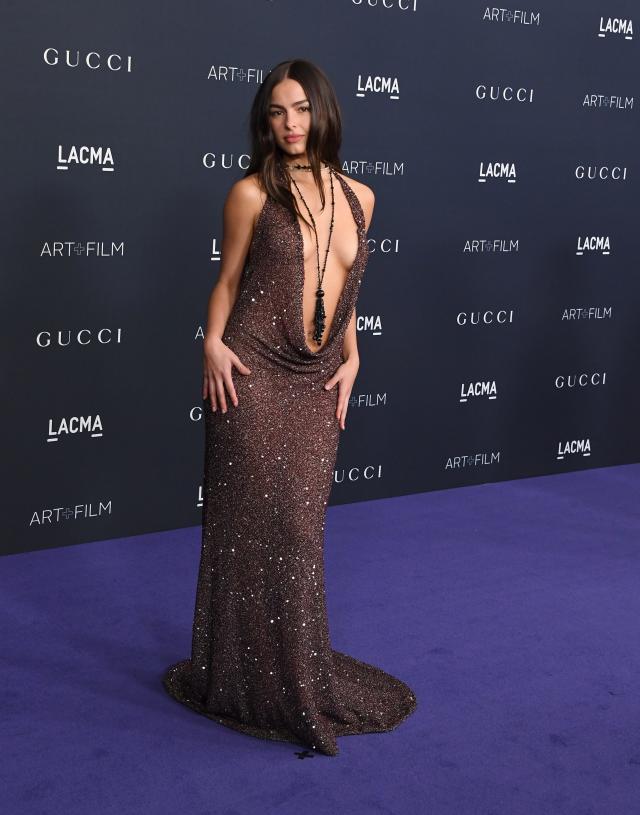 Under a Gucci blanket, Billie Eilish and her new boyfriend Jesse Rutherford made their red carpet debut.

Jesse Rutherford and Billie Eilish at the LACMA Art+Film Gala.

Wrapped in custom Gucci, the couple wore silk-like ensembles that matched beneath a large duvet. Eilish’s accessories included a sleep mask with the Gucci logo.

Insider earlier reported that the last time Eilish and Rutherford were seen together was at a Halloween party dressed as a baby and an elderly man.

Addison Rae wowed in a shimmering antique taupe gown with a plunging neckline.

Addison Rae in attendance at the LACMA Film+Art Gala.

She accessorized the embroidered dress with a V-shaped necklace.

Jodie Turner-Smith updated the iconic flapper aesthetic of the 1920s.

Jodie Turner-Smith was present at the LACMA Art+Film Gala.

W Magazine writes that Jodie Turner-Smith appeared straight out of “The Great Gatsby” in her black-and-gold Gucci flapper dress at the event.

The actor completed her ensemble with a pair of strappy black stilettos and elbow-length gloves that matched her outfit.

For the Los Angeles event, both Kardashian-Jenner sisters opted for outfits with deeper hues.

According to W Magazine, Kim wore a head-to-toe Balenciaga gown that appeared to be constructed from a fabric similar to a wetsuit. There were gloves and a small train on the dress.

Kendall donned an ensemble from the Parisian brand Burc Akyyol. It had a sheer long-sleeved top with black geometric motifs and a floor-length silver skirt.

Sydney Sweeney was present at the LACMA Art+Film Gala.

According to Dickson’s Instagram story, the floral gown is from the Fall/Winter 2022 couture line by Giambattista Valli.

Andrew Garfield was as dapper as ever while wearing a luxurious indigo-blue Gucci suit.

Andrew Garfield was in attendance at the LACMA Art+Film Gala.

Andrew Garfield, age 39, was yet another celebrity to wear Gucci to the LACMA Art+Film Gala.

His navy velvet suit was embellished with gold studs, and he combined it with a light-yellow collared shirt.

Olivia Wilde in attendance at the LACMA Art+Film Gala.

The director of “Don’t Worry, Darling” accessorized her otherwise subdued costume with a pair of ruby crimson gloves. Her accessories coordinated with her tiny bag and red heels.

According to W Magazine, the dress was a Gucci design and had purple and silver jagged stripes throughout.

Additionally, Jared Leto donned a velvet Gucci suit without an undershirt. He completed his ensemble with leather gloves and white boots with heels.

At the LACMA Art+Film Gala was Jared Leto.

At the LACMA Art+Film Gala, velour suits with studs appeared to be in style.

The star of “Morbius” accessorized with black leather gloves and white boots with heels.

»From Billie Eilish to Kim Kardashian, 8 of the greatest and most daring ensembles from the 2022 LACMA Art+Film Gala«