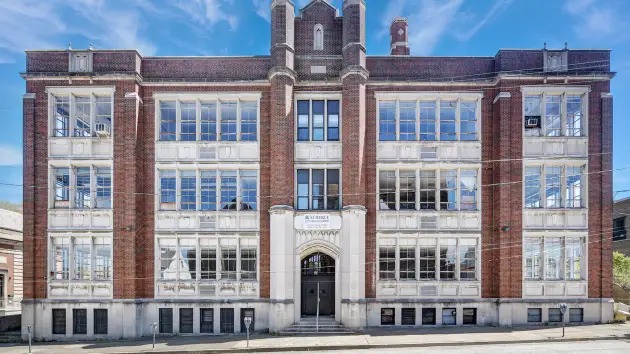 In 2019, a group of resourceful friends banded together to purchase an abandoned high school for about $100,000, and they later converted it into a 31-unit apartment complex with luxurious amenities.

The possibility was initially noticed by Jesse Wig, a 34-year-old real estate agent, when the school, which is located in Homestead, Pennsylvania, was put up for sale that same year.

A 35-year-old investor named Adam Colucci then joined in and discussed several uses for the structure, such as a wedding venue, a beer garden, and even a WeWork location.

When Colucci and Wig requested his assistance, 41-year-old developer and multifamily property manager Dan Spanovich made the decision to work with his buddies.

They ultimately decided to convert the structure into a residence after Spanovich joined. The group has been contacted by The Post for comment.

Three years later, the building now offers four two-bedroom units and 27 one-bedroom residences, with rent starting at $1,650 per month. Each apartment in a modern building has a washer and dryer.

In an interview with CNBC’s Make It, Wig said, “I was made aware of the school, and to be quite honest, I wasn’t sure what made the most sense to do with the building.” However, given the cost, I was forced to buy it and hoped that a better solution would be found in the future.

After two years of futility, Colucci continued, “all the experts informed us that the end of the road is going to be residential. We had huge eyes.”

The conversion of these older structures might be exceedingly difficult, according to Spanovich. “We were prepared to take a chance, regardless of the potential benefit. We were confident that at this price, we could put it to use in a way that would create a profit large enough to appease everyone.

It took some time to layout the floor plan because the building had been vacant for a while.

Former classrooms have been converted into apartments, and the school’s auditorium has been changed into a communal sitting area.

A state-of-the-art full gym with weights, Peloton bikes, and a half-basketball court is located on the ground level.

The partners were trying to obtain roughly 60 flats totaling 50,000 square feet. However, they were ultimately only left with 25,000 square feet of usable space.

In the end, the enormous halls, stairways, gym, and auditorium had taken up too much room.

Colucci said of the building, “We worked together with the National Park Services to guarantee it preserved its historical relevance. “We made a special effort to maintain the school’s historic appearance.”

The partners earned historic tax credits from Pennsylvania and the federal government, but they wouldn’t say how much.

The apartment building was entirely leased six months after it became operational. The three partners have divided all earnings and costs equally.

However, the concept did not end with just one closed school. They bought two more schools after seeing the success of their initial venture.

Spanovich joked, “You almost want them to look like haunted houses, so you have less competition. When the buildings look lovely, you get a lot of people bidding on them.

The second school will be converted into 33 residential apartments, most of which will be one-bedroom alternatives with a few studios.

Colucci warned, “Someone once told me that buying beautiful buildings can make you broke, so be careful.” Dan, who is fortunately part of our team, was able to sort out the logistics to make it happen.

The auditorium in the first school, the double-decker parking garage, and the rooftop terrace in the second building are just a few of the features that the three partners said they want residents to have full access to.

It has been satisfying and advantageous to see the neighborhood flourish, according to Wig.