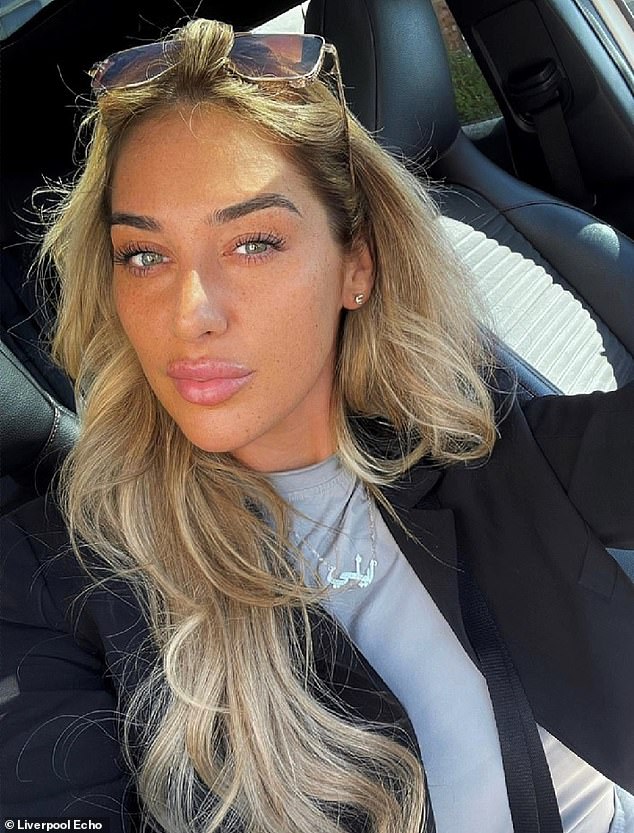 Friends of a lady who was fatally shot at a crowded pub on Christmas Eve said she was singing and dancing before they heard “fireworks-like” blasts and found her laying on the floor.

Elle Edwards was shot in the head at 11:50 p.m. while celebrating Christmas with her sister and friends at the Lighthouse Inn in Wallasey, a village near Liverpool.

Jess, a friend who was with her when she was shot, told Sky News: ‘We had gone to the bar for a drink when we heard what sounded like fireworks. We had been singing and dancing, and she is now on the floor.

‘We were so happy. It occurred so quickly that I cannot get it out of my mind. I wish we could have done more, but nothing else was possible.

Friends of the deceased Ms. Edwards (above) have described her as “the most beautiful angel.”

Ms. Edwards, who was described by her friends as a “crazy diamond,” died at the scene despite the valiant efforts of the partygoers who performed CPR on her.

Lucy, the sister of Ms. Edwards, resides in Dubai, but she flew home to enjoy Christmas with her family. She left the pub prior to her sister’s murder.

In an emotional Instagram post, she referred to her sister as “my beautiful sister, my closest friend, my second mother, and my rock.” I already miss and adore you so much. My Emily May.

Jess, her friend, stated, ‘People were attempting to assist her, but it was futile. I felt awful since I spent Christmas with my family while she was alone.

In reference to Ms. Edwards’ sister departing the pub early, she remarked, ‘It makes you wonder if she should have left as well.’

Another acquaintance, Meg, who did not offer her last name, stated, “We were singing and dancing.” I have videos of all of us that I cannot stop watching. We were really happy.’

When asked about their memories of their friend, they characterized her as “very funny,” adding, “We’ve never been out and not had a good time.”

Merseyside Police have stated that a 30-year-old man from Tranmere has been detained on suspicion of murder and attempted murder.

A 19-year-old Rock Ferry woman has also been arrested on suspicion of murder conspiracy.

According to the police, the two suspects have been arrested and will be questioned by detectives.

Four individuals inside the bar sustained gunshot wounds, including a 28-year-old who, according to police, is still receiving medical care in the hospital but is no longer in serious condition.

Tim Edwards, the father of Ms. Edwards, visited the scene yesterday to lay flowers among the increasing sea of tributes left in front of the bar, while her family praised her as “the joy of our lives.”

Her parents wrote, “To my lovely Elle, you are the light of my life, and you will never be gone.”

Those with information regarding the incident have also been encouraged to “do the right thing and speak out.”

Merseyside Police and local councillors advise that anyone with pertinent information regarding Ms. Edwards’ death should not “remain silent” or “sit in silence.”

Elle Edwards’ parents left a devastating memorial for her after her death on Christmas Eve at a pub. They wrote, “To my lovely Elle, you are the light of my life, and you will never be forgotten.”

Jess (right), who was with her when she was shot, told Sky News, “We went to get a drink and were in the pub when we heard what sounded like explosions.”

Merseyside Police and local councillors state that persons with useful knowledge should not “remain silent” or “sit in silence.”

On Monday, police and community leaders came to speak with and support Wallsey Village residents.

Officers were accompanied by local councillors, Wirral Council representatives, and the office of Dame Angela Eagle, the area’s Member of Parliament, “to demonstrate their support to people during this difficult time.”

They went door-to-door in the roads surrounding the community “to reassure locals and give them the opportunity to voice any concerns they may have.”

Superintendent Matthew Moscrop stated, “We ask anyone with information, no matter how insignificant, to contact us, thereby supporting the inquiry and aiding in the pursuit of justice for Elle, her family, and all others injured or otherwise affected.”

“Now is not the time for anyone who knows who committed this shooting to remain silent. Contact us with relevant information.’

Tim Edwards, the father of Elle Edwards, places a flower wreath in front of the Lighthouse Inn in Wallsey Village.

Near the shooting scene, a police officer stands in front of floral and written tributes to Ms. Edwards.

It stated, “Absolutely speechless… Heaven has gained the most beautiful angel.” We are all heartbroken, and our thoughts are with your family at this time. Thank you for all the laughter and joy you brought to our lives, Elle. Rest in paradise, angel.

Yesterday, officers stated that they did not believe Ms. Edwards was the intended victim of the attack at the Lighthouse in Wallasey Village, Merseyside.

Major Crime Investigations Detective Superintendent Sue Coombs stated, “We have made two arrests in connection with this cold-blooded shooting.”

Our fully trained family liaison officers are providing support to Elle’s family as they continue to come to terms with her devastating loss.

We will not rest until the perpetrators are brought to justice, and I encourage anyone with information to contact us.

The head of the Wirral Borough Council, Jeanette Williams, called the shooting as “horrific and repulsive.”

She stated that it was an isolated incident that was out of character for the area.

The council chief stated, ‘Our hearts go out to Elle’s family during this awful time as they mourn the loss of a dear one.

“If you have any information, do the right thing and speak out; otherwise, you are implicated in the young woman’s death.” And nobody can remain silent.

Lesley Rennie, a local councillor, stated that residents are “mortified by what has occurred” and that the murder “appears to be a completely random act of violence where people were out celebrating Christmas Eve with family.”

In a heartfelt tribute, her friend Tyreece Hon referred to her as a “big sister.”

After her terrible death, people have left floral and written memorials for the 26-year-old.

He penned, “Last night, this angel received her wings and ascended22 to the heavens.” In my view, Ellie was always a big sister, and I cannot believe you were stolen from us so young.

“My heart goes out to your family, who adopted me as a son. I adore you tremendously. Shine brilliantly, you wild jewel. Until our next meeting’

And following her sad death, her friend Britt Hughes remarked, “Christmas will never be the same again” and that she “made me so joyful inside when she stepped into the room.”

She continued by saying that Ms. Edwards would leave her in “fits of laughter” and that she would be “so missed, my beautiful best friend.”

She also pleaded in desperation, “When will people stop shooting?”

People reportedly attempted CPR on Ms. Edwards while emergency personnel arrived to the site, as reported by the Liverpool Echo.

Following the horrible incident on Christmas Eve, Ms. Edwards’ family and friends have paid her homage.

One parent stated on social media that their daughter was performing CPR with another girl until help arrived.

For her actions, others referred to the young woman as a “hero” and a “brave, selfless young lady.”

Another parent stated, “My daughter was present, and she and her friends returned home safely, but she is really distressed.” She was standing directly next to the victim. So terrifying.’

Earlier footage showed a woman asking, “Is it a gun?”

‘ while she sat in the pub’s parking lot as the horrifying event transpired.