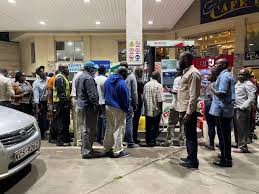 Kenyan authorities have reportedly cancelled the work permit of a French chief executive of one of the biggest oil marketers in Kenya amid a fuel shortage crisis.

The government is said to have ordered the deportation of Christian Bergeron, the chief executive of Rubis Energy Kenya – a subsidiary of France-based Rubis Group.

The energy regulator had on Tuesday accused some oil marketers of withholding the supply of fuel to the local market and prioritising exports to neighbouring countries.

The regulator said “these companies would be punished by restricting the volumes of fuel they will be allowed to import for the next three months.”

Kenya fuel companies sell about 65% of their imports to the local market and the rest to neighbouring landlocked Uganda, Rwanda and the Democratic Republic of Congo.

There has been a major shortage of the commodity in recent weeks across the country, with long queues forming in pump stations.

Kenyan authorities say ‘there is enough stock in the storage facilities.’
There is speculation that “some marketers have been hoarding fuel in anticipation of a price increase on Thursday when the regulator reviews prices for the next month.”

Experts say the ‘current crisis in Kenya has been caused by a delay in disbursing fuel subsidies owed to oil marketers.’
Kenya subsidises fuel prices to cushion consumers from higher fuel pump prices.

But oil marketers have been complaining of delays by government to compensate them for the government-subsidised prices they charge consumers.

The government released some of the delayed payments last week.