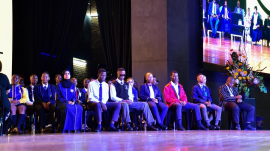 Four years in a row, the Free State has had the highest percentage of learners pass their National Senior Certificate (NSC) examinations, with a success rate of 88.5%, a rise of 2.8% from 2021.

The Basic Education Minister, Angie Motshekga, stated this on Thursday evening at the Mosaek Church in Fairlands, Gauteng, during the release of the 2022 Matric results.

While COVID-19, power shedding, and service delivery protests may have had an influence on the academic programme, the Minister said that the Class of 2022 achieved an overall pass rate of 80.1%, a 3.7% improvement over the previous year.

None of the provinces fell below the 70% pass rate, and none had a fall in performance from the previous year.

In addition, Motshekga said that five provinces earned a pass rate of over 70%, while four provinces reached over 80%.

KwaZulu-Natal, Limpopo, and the Eastern Cape are the provinces with the greatest performance gains, at 6.2%, 5.3%, and 4.2%, respectively.

In the meanwhile, the Minister said that the National Development Plan (NDP) recognises districts as a vital interface of the Basic Education sector in finding best practises, exchanging information, and supporting schools.

“The continued growth in the performance of districts is closely monitored and evaluated by both the provincial and national Basic Education departments. From the monitoring oversight, analyses of the performance of all schools… will be done and made available to districts. This will assist and enable districts to reprioritise their support and intervention programmes.”

According to the Minister, none of the seventy-five districts had pass rates lower than sixty percent, while four districts fared between sixty and six-nine percent.

The top 10 district-level performances in the country in descending order: