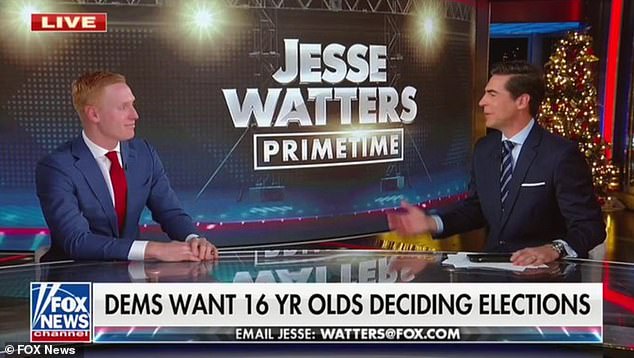 Francis Ellis, Fox News contributor and host of Barstool Sports, was recorded on a hot mic disparaging Fox News and its stars, accusing them of “trading in hatred.”

Ellis came on Jesse Watters’ 7pm program on Monday night, and the next day, he was asked by a Barstool Sports co-host how it went.

Ellis stated that he was dissatisfied with his performance, but that his wife convinced him it was unimportant.

Ellis acknowledged that she was correct since the network was promoting discord.

He claimed that he was concerned Fox News viewers wouldn’t know he was joking when he said, “Democrats are devouring toddlers beneath pizza restaurants.”

Barstool Sports inadvertently uploaded the video before taking it down.

Mediaite received the audio and broadcast it in full.

Francis Ellis is seen on Jesse Watters’ Fox News broadcast on Monday night. The next day, Ellis criticized Fox, accusing the network and its hosts of “hate peddling.”

Ellis and Barstool Sports founder Dave Portnoy, who is a frequent on Fox, have not reacted on his unguarded words.

In the footage, co-host Adam Ferrone remarks that he failed to ask Ellis how his appearance on Fox News the night before went.

Ellis stated, “It went well.” Well, he wanted me to discuss how Massachusetts Democrats want to cut the voting age to 16 years old.

He expressed dissatisfaction with his performance on Watters’ program.

He stated, “I made a To Catch a Predator joke.” I had included a QAnon reference.

But he stated that he felt he was stuttering and that he could not find his footing. I thought, ‘I’m trying too hard.’

Ferrone asked Ellis if he desired a full-time position at Fox.

Ellis has previously been on Watters’ show. He often contributes to Fox News.

Ellis responded, “They wanted me to do man on the street for them, but I had to decline.”

They asked me to take a subway bingo card into the train and ask random passersby, “Have you seen a rat? Fill out your bingo card.” And that was like so ridiculous.’

Ellis stated that he would consider an anchor position if given.

He continued to express his displeasure with his performance on Monday, but his wife was dismissive of Watters.

‘Look, I got home. I told my wife because I was disappointed with myself, and she said, “Let’s be honest, do you want to work with these f****** people?”

Then, Tucker gets on and simply shouts. It is really strange.

They are only dealing in hatred.

Ellis stated that Fox News commentator Tucker Carlson (above) “just yells” and accused him and his network of “trading in hatred.”

He stated that he believed Fox viewers would not enjoy his gags.

“I believe I went to a place last night that I shouldn’t have,” he stated.

“No, because last night I thought, yep, the Democrats are like devouring toddlers beneath pizza parlors.”

“There are individuals watching who are unaware that I am f****** with them.

They are thinking, “Finally, a young, attractive individual is speaking it!”

A producer made fun of Ellis, stating that he took himself too seriously and asking, “Are you Jesus?” What are you going to do to fix everyone? Come on, dude. You are expected to make jokes.

Ellis stated that he was still concerned about his appearance on Fox.

He stated, “I’m not here to fix people.”

However, I am not here to further polarize the country.