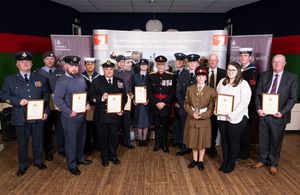 The efforts of fourteen people, including seven young cadets, from across Mid Glamorgan have been recognised by the Queen’s representative for the county.

Around 100 people attended the event on April 7, to mark the new appointments and celebrate high achievers from the reserve and cadet communities.

The role of Lord-Lieutenant cadet lasts for one year and includes attendance with the Professor, who acts as the Queen’s representative, at a number of official engagements such as Remembrance events, Royal visits and parades.

Seven adults were also recognised for their outstanding service and devotion to duty and awarded the Lord-Lieutenant’s Certificate of Merit.

There are nearly 5,000 cadets in Wales who gain skills and qualifications through working with local communities, charities and taking part in a variety of practical activities. The cadet syllabus is delivered by 1,500 volunteering adult Instructors and civilian assistants, who give up their spare time on weeknights and weekends.

The virtual awards event was organised by the Reserve Forces’ and Cadets’ Association (RFCA) for Wales – an organisation that has supported the Armed Forces for over 100 years.