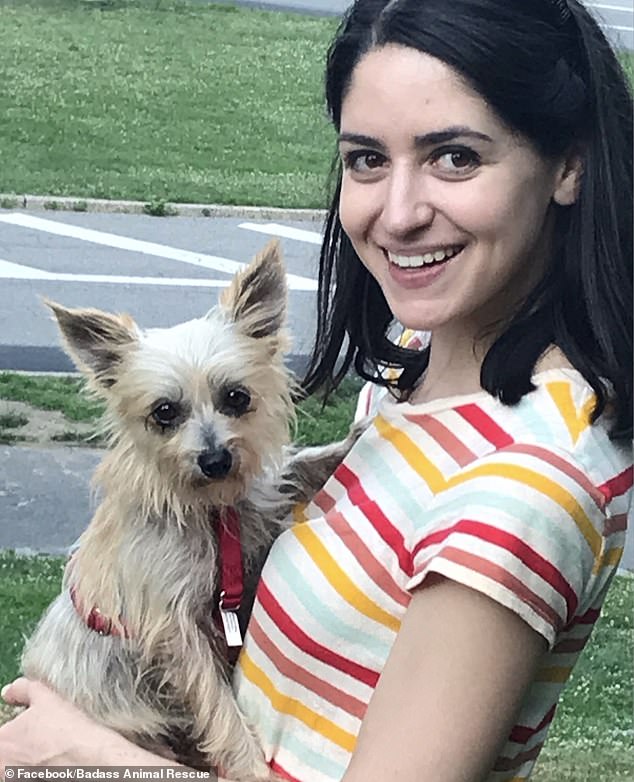 The foster mother of Bob, a stray dog who was unclaimed at a New York City adoption event, stated that “hundreds” of people have submitted adoption applications since a video of him went viral.

Julie Zeilinger took to social media to share her delight that so many people are interested in adopting Bob Parr, the name given to him by the shelter, after a TikTok video of him went viral.

She stated in her Instagram story, ‘It’s wonderful that so many people care about Bob’ Because of this video, hundreds of people have expressed interest in adopting him.

Julie, who already has a permanent pet, Baloo, encourages others to consider other puppies available through the Brooklyn animal shelter.

There are millions of dogs in need of homes, yet only one is being fostered.

Bob went viral over the weekend after thousands of users identified with the dog who was being overlooked by the throng.

Andrea Caceres, an illustrator who goes by PetArtByAndrea on TikTok, posted the video with the description, ‘He is the loveliest puppy,’ along with a sad face emoji.

In the TikTok, the person filming displays the crowded event in Central Park, held by Badass Animal Shelter Brooklyn, and writes: ‘POV: You are at an adoption event where all the available dogs are receiving attention except for one…’ Bob.’

Julie Zeilinger, Bob’s foster mother, told DailyMail.com on Monday that some people did interact with him despite his extreme shyness, but it was difficult.

Julie stated that Bob has been with them for almost four months and that it took him some time to warm up to them.

She believes that the reason he wasn’t as popular with the attendees was because he was nervous because it was his first time at such an event.

Julie stated, “He was quite overwhelmed, and I believe people noticed that and wanted to give him room,” adding that whoever adopts him is in for a treat.

She stated, “He is a very sweet puppy who only wants to love and be loved.”

When Bob’s name appears on the screen, the camera pans to reveal a three-year-old, 10-pound puppy waiting expectantly to be played with.

According to his PetFinder profile, Bob is a terrier. He scans the gathering of dozens of people, looking for someone to approach him.

As Bob rests on the grass, the woman accompanying him quietly pets him while simultaneously scanning the area to see if anyone is approaching.

It was also Bob’s first adoption event appearance after receiving treatment for heartworms.

The puppy is also “very timid” and requires a patient, caring owner.

Bob, according to Caceres, would be a great dog for a home or family residing in a more tranquil region.

Since its Sunday upload, the video has received 3,1,000,000 views and tens of thousands of reactions.

More than 400 thousand people have liked the TikTok video, and about three thousand individuals have commented on the post.

‘COME ON, PEOPLE!! Bob is undeniably a top-tier dog! ‘ stated one commenter.

‘Look. I do not weep often. However, even a mildly sad story about a dog leaves me in tears. I’ll hyperventilate,’ said a second individual.

“My weak heart cannot bear it. The way he’s gazing about as if to ask, “What about me?” was remarked by a third commenter.

Caceres uploaded a second video to provide additional information about Bob after his initial viral TikTok became so successful.

One individual wrote, “I will not be able to sleep until I hear he has been adopted.”

If he is not adopted, I will completely lose my mind. We adore Bob,’ wrote a second.

Bob was named after the Pixar character from ‘The Incredibles’ due to his’super power,’ according to his PetFinder.com bio.

Unfortunately, he and his puppies were abandoned at the shelter during one of our rescue missions, the page states.

His profile continues, “But given his incredible power, we’re confident he’ll be able to put the past behind him and become the ideal companion he was always designed to be.”

Once he realizes he can trust you and you’re there to protect him, he’s all yours, according to his foster mother.

Julie also uploaded a video on TikTok on Monday, revealing additional information about the 10-pound dog.

Julie noted in the video’s caption, which depicts a ‘butt pop,’ “He often battles to stay awake and has the sweetest little butt pop when he’s feeling frisky.”

She stated that he came from Georgia to the shelter in June and has been with her and her family ever since.

Officials report that Bob has been neutered and is ready to be transported home.

@juliezeilingerMore Bob content! He often struggles to stay awake and has the cutest little butt pop when he’s feeling frisky. He wasn’t allowed to get his heart rate up for 2 months while undergoing medical treatment so he has clearly spent a lot of time on our couch. He has a lot of applications now thanks to @petartbyandrea but you can apply here! https://badassanimalrescue.com/adoption-application

She stated that he has been undergoing treatment for the majority of his stay in their home, and that Sunday’s outing was his first official adoption event.

The foster mother also stated that Bob is accustomed to spending “a lot of time” on the couch because he was unable to increase his heart rate during worm treatment.

The foster mother added that the dog may have gotten lucky by going viral on TikTok.

‘He currently has many applications due to @PetArtByAndrea, but you may still apply here!

” Julie wrote in her caption on TikTok.

If you would like to put in an application to adopt Bob, you can do so by clicking here.

»Foster mom says “hundreds” of New Yorkers want to adopt Bob, the dog no one wanted«