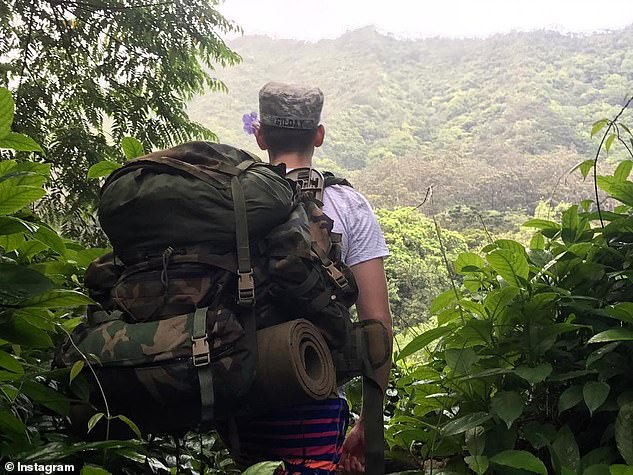 A former U.S. soldier attempted to plea guilty but mentally ill to the murder of the daughter of a former Kentucky lawmaker whose $6.5 million home he allegedly stalked because he believed it had a fallout shelter.

Police said Gilday’s research into Kentucky homes that contained doomsday bunkers led him to Wesley’s home in Richmond, Kentucky, which had an elaborate underground shelter that Wesley, a Republican, had built when Barack Obama became president.

Another hearing will be held on Monday to discuss the plea as Gilday’s attorney, Tom Griffiths, told the Lexington Herald-Leader that his client is mentally ill and wanted to avoid a lengthy trial and accept culpability for what he’s allegedly done.

‘It is not good for the victims, and not good for the community,’ Griffiths said of the trial. ‘It doesn’t serve anybody, and rather than put everyone through that (Gilday) wanted to accept responsibility.’

A plea of guilty but mentally ill does not alter the sentence a defendant would receive if they were found guilty but does allow a court to determine what treatment the defendant requires for their mental illness.

‘(Gilday) feels terrible about what happened and what he did and knows there is no way he can make it right, but, one thing he can do is accept responsibility in court so that this is not hanging over everyone’s head,’ Griffiths added.

Gilday’s arrest warrant said notes found in his apartment by a friend hours after he allegedly killed Jordan showed that he was researching the home and observing the Morgan family, even tracking their sleeping schedules, WXIX reported.

During the pre-trail hearing that month, Kentucky Police Detective Camron Allen told the court that Gilday, ‘stated he had prepared himself to force his way into the residence by any means necessary.

Gilday’s mother Katie had also written on Facebook that her son was not of ‘sound mind’ and was ‘distraught with the certainty a nuclear war is imminent.’

A listing for the house shows that it contains a shelter 26 feet underground with a 39-inch solid concrete ceiling and 15-inch walls.

Gilday was arraigned in March in Madison County District Court where he was charged with murder, first-degree burglary, first-degree criminal mischief, first-degree assault, and two counts of attempted murder.

The friend who found the Gilday’s notes told police he was supposed to meet up with Gilday on February 22 at 11 a.m., hours after Gilday allegedly broke into the Morgan home with a rifle.

When he didn’t show, Gilday’s friend went inside the apartment where he found the notes and directions from Taylor Mill to the mansion in Richmond, according to the arrest warrant.

After shooting the 32-year-old, police say he exchanged gunfire with her father before he fled, injuring both Morgan and his wife.

It comes complete with a saltwater pool, steam sauna and heated floors set on 200 acres of lakefront property.

However, perhaps its most unusual feature is a 2,000-square-foot, fully stocked underground bunker set behind a huge steel and concrete door.

The $6.5million listing advertised the home as being able to withstand nuclear attack and described by realtors as being ‘the most secure home on the market in this country,’

The bunker is said to contain a 2,000-square-foot, steel-enforced bunker itself said to be worth $3 million.

‘It is built to withstand a Seismic 12 earthquake, has 3 air filtrations from Switzerland and 2 escape tunnels, one is approximately 100 yards long,’ the realtors wrote in the listing.

Wesley, a former Republican Kentucky State Representative, has since been released from hospital and is expected to recover from his minor wounds, but in an emotional statement in March, he told how he will never get over the death of his first-born child.

‘I’m heartbroken,’ he said as he audibly started crying. ‘I can’t understand why, and would give anything on this Earth if it would have been me rather than her.

Wesley said he was with his daughter, watching TV, just hours before the shooting.

Gilday’s mother, Katie, detailed her son’s delusions in a Facebook post advising him to turn himself in so he can get the help he needs.

‘He spoke of building a bunker and the CIA following him,’ she wrote.

‘I tried to get him psychiatric help but to no avail.’

Gilday once harbored ambitions of becoming a doctor in the Army. He revealed this aspiration during his time as a student studying Bioengineering at the University of Hawaii at Manoa where he was on an ROTC scholarship.

His commander noted Gilday’s ‘enthusiasm and openness to learning.’ He was described as a ‘shining light’ in the class whose dedication had earned him tuition waiver.

The commander concluded, ‘We are excited to see what is in store for him.’

For his part, Gilday wrote that he decided to join the Army ROTC because, he viewed it as, ‘one of the few bastions of chivalry and apolitical service to the people.’

He continued: ‘One of the aspects of Warrior Battalion I most particularly appreciate is the high standards it sets for its Cadets. We are always motivated to excel academically, athletically and as leaders.’

He said that his membership of the program had ‘pushed’ him to set ‘higher standards of discipline’ for himself and to ‘act honorably and respectfully’ among his peers.

His listed as his favorite memory ‘the night of the land navigation’ during which he had ‘scoured dense vegetation’ and ended the day telling stories beneath the starts with fellow cadets.

He professed his hope to become an Army medic and belief that his time with Warrior Battalion would equip him with ‘the necessary skills’ he needed to succeed.

Alforque said it’s possible the skills Gilday learned in training helped him remain on the lam.

‘We were taught to be ‘infantry” Alforque said. ‘Camouflage, stealth, and tactical.’

Gilday could be short-tempered at times, Alforque said, and was ‘easily triggered when he couldn’t finish a work or task I gave him while I was a senior Cadet.’

On one occasion, Gilday became so aggressive during a house party that Alforque said he had to ‘choke him out to sleep’ to bring him under control.

But he had his quiet side, too. He posted an Instagram video of himself playing classical guitar asking people for campfire song recommendations. When his cat comes in, he says he named him Wilhelm, ‘after the last German Kaiser.’

Before returning to Kentucky, Gilday joined the military in Fort Huachuca, Arizona, where he texted his mentor about being jailed for attacking another officer.

‘I started a fight and now they’re trying to throw me out of the Army,’ he texted Alforque, asking him to supply a character reference.

‘I definitely overreacted, but it’s not characteristic of what kind of soldier I am,’ he added.

He said military brass thought he was ‘not Army material because I can’t take orders.

‘But that’s not true,’ he texted. ‘I’ve been following orders fine the past year. I just overreacted because I was worried about money and stuff and I didn’t know the guy.’

He said he spent two months in military prison.