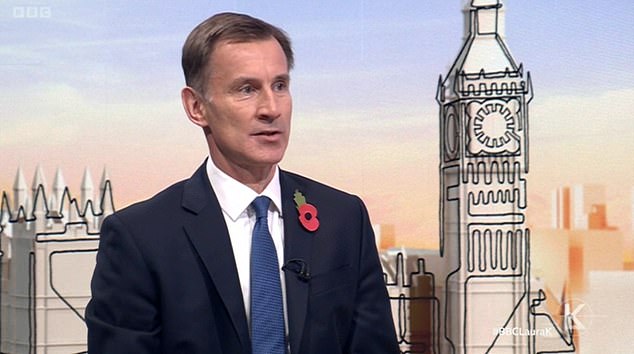 An ex-cabinet minister warned yesterday that the massive tax hikes planned by Chancellor Jeremy Hunt could “choke off growth” and create a deeper recession.

The former Levelling Up Secretary in the government of Liz Truss, Simon Clarke, advised ministers to prioritize spending cuts above tax increases as they struggle to balance the books before Thursday’s Budget.

During his time at the Treasury, Mr. Clarke worked as Rishi Sunak’s deputy. He told Sky News, “With the tax burden at a 70-year high, we need to be exceedingly cautious about increasing the hurdles facing businesses and households.”

Mr. Hunt has already confirmed tax increases for all taxpayers, as the 45p top rate has been reduced to £125,000.

Mr. Hunt dismissed the notion that the government could immediately undertake unfunded tax cuts to mitigate the effects of an impending economic crisis.

He stated, in a barely veiled jab at Miss Truss, ‘We have tried that.’ We observed that it did not work, and we have learned from our errors. Now is the moment to implement a plan that will endure the test of time.

Mr. Hunt emphasized that he remained dedicated to cutting taxes in the long run, but stated that the government must first rein in the inflation that is wreaking havoc on family and corporate finances.

As major cuts are expected to be announced in the next Budget, all eyes are on Mr. Hunt.

“Sound money must come first, because inflation erodes the pound in your pocket or pound in your bank account just as insidiously as taxes, since it drives up the price of your weekly groceries,” he said.

However, the idea of rising taxes causes concern among Conservative legislators.

Sir Iain Duncan Smith, a former leader, stated, “If they try to hit us too hard with tax increases, they will push us deeper into a recession, and any deficit they believe exists will expand.”

Ministers are still contemplating whether to modify the law to allow local governments to raise council tax rates by the rate of inflation without conducting a local referendum.

Ex-Secretary of State for Levelling Up Simon Clarke argues that further tax cuts are required to reduce the tax burden.

However, a number of further tax increases are rumored to be locked in ahead of Thursday’s announcement.

This includes a six-year freeze on income tax thresholds, which is likely to push more than three million individuals into higher tax bands.

National Insurance, inheritance tax, and tax-free pension savings thresholds will also be frozen, but the capital gains tax threshold will be cut in half to approximately £6,000.

After 2025, government departments will be required to make significant real spending cuts in order to balance the budget. The Government’s centerpiece ceiling on social care spending is likely to be delayed until after the upcoming election as a result of the cuts.

However, Mr. Clarke argued that budget reductions should be expanded to alleviate tax burdens.

He recommended that the £100 billion HS2 rail project should be scaled back, saying, ‘We have observed that rail passenger numbers have not recovered to pre-pandemic levels, especially for commuter travel. There are legitimate concerns about such plans that I believe should be addressed first.’

The Chief Secretary of the Treasury stated Wednesday that ministers will also seek savings by “eliminating waste.”

John Glen stated that the government may be made “more efficient” by speeding the sale of underutilized buildings, especially in central London, and by “turbo-charging” initiatives to digitalize public services.