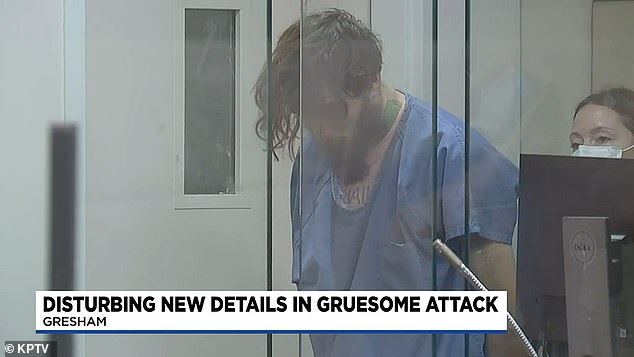 On a train platform near the violent Portland early on Tuesday morning, a 25-year-old former college soccer star is accused of chomping off the ear of a 78-year-old man because he believed the victim was a robot trying to kill him, according to police.

Later, Koryn Kraemer admitted to investigators that he had consumed alcohol, smoked marijuana, and taken fentanyl pills before the attack. He claimed that the victim’s odor, which led him to believe he smelled like a robot, inspired him to attack.

Kraemer spat out pieces of the man’s face onto the street at the scene. The senior citizen’s skull was partially visible, according to the responding officers.

The suspect was raised in wealthy Westfield, New Jersey, according to records. He also started in goal for the soccer team at Oberlin College from 2015 to 2016.

Kraemer informed the officers that their prompt arrival had spared his life from the robot.

According to the affidavit, officers had to physically separate Kraemer from the victim before rushing the elderly man to the nearest hospital.

According to the investigators, the suspect initially identified himself as El Baker and was jailed under that name. Kraemer, who had recently relocated from Georgia to Portland, was later recognized by Multnomah County jail staff, according to records.

Near Portland, in Gresham, at the Cleveland TriMet MAX platform off Northeast 8th Street, the incident took place. The Oregonian named the victim as Hillsboro, Oregon resident Gray Krussow.

Kraemer claimed to have recently been evicted from his home in the St. Johns neighborhood of Portland at the time of his arrest.

When Kraemer wasn’t intoxicated or high, the landlord of the residence told KGW that he was “sweet” and “pleasant.” According to the landlord, Kraemer was kicked out of the house in November after doing damage. The suspect, who is unemployed, spent about a month residing there.

Within less than 150 square miles, Portland is home to more than 700 homeless encampments. The situation has also contributed to a sharp increase in the use of cocaine, heroin, LCD, and meth, which authorities decriminalized in 2020.

Kraemer previously played goalie for the soccer team at Oberlin College, according to the school’s website. His 6-foot-3 height is stated in his profile. Kraemer was the focus of an article for the school newspaper during his time there.

‘I fell in love with soccer as a very young child watching my father play, and eventually became involved with various club programs and traveling teams,’ Kraemer stated in a recruitment statement.

He continued, “In the end, my goal is to pursue a career in law or business by earning a college degree, while also continuing to play the game that I love at a high level.”

Kraemer added, “I’ve trained young children at different goalkeeper clinics. This, I’ve discovered, has given me a great deal of joy and taught me a great deal about life.

According to her online bio, his sister Kylinn is a star student at Montclair State University.

Kylinn, a psychology major, serves as president of the Petey Greene Program at Montclair State, where participants study and promote criminal justice reform. She also works at Northern State Prison as a tutor.

An affidavit of probable cause states that police and deputies were called to a light rail platform in Gresham after a caller reported seeing a lot of blood and an attacker standing over a victim.

The document states that Krussow is under sedation but that his condition is stable. Kraemer is being held without bond in custody. He has never been convicted of a crime.

State Representative Ricki Ruiz told KGW that she was shocked by the incident. Just seeing this near where I live is very alarming, worrying, and quite frankly terrifying.

Residents of Portland, which is governed by Democrats, stated in November that the rise in crime and homelessness is having an impact on their quality of life and safety.

Tent cities have taken over some of the Pacific Northwest city’s most quaint, fashionable, and pricey neighborhoods, clogging residential sidewalks with trash, and scaring away both locals and visitors.

The city counted just over 2,000 homeless people living on the streets in 2019 – not including those staying in temporary housing.

Three years later, that number has increased by 50%, and it is currently over 3,000.

Mayor Ted Wheeler described the homeless situation in Portland as a “vortex of misery.”

“The depth and scope of the homelessness crisis in our city is nothing short of a humanitarian catastrophe,” the mayor declared.

Additionally, he said that by outlawing the illegal encampments throughout the city, space would be made available for the construction of 20,000 units over the following few years.

However, the mayor stated that the units’ construction would happen over the following ten years.

Mayor Wheeler stated, “We need to move our dispersed, vulnerable homeless population closer to the services that they need.”

In 2022, Portland is estimated to have seen 93 homicides. However, the city police department’s data has only released statistics up until October of this year, identifying 82 murders, so it has yet to confirm this figure.

This was significantly higher than the murder rate in 2020, when there were 57 homicides.

After voters approved the ballot measure, the state of Oregon legalized a number of hard drugs for recreational use starting in 2020. Heroin, methamphetamine, LSD, oxycodone, and other drugs in small quantities for personal use were permitted.