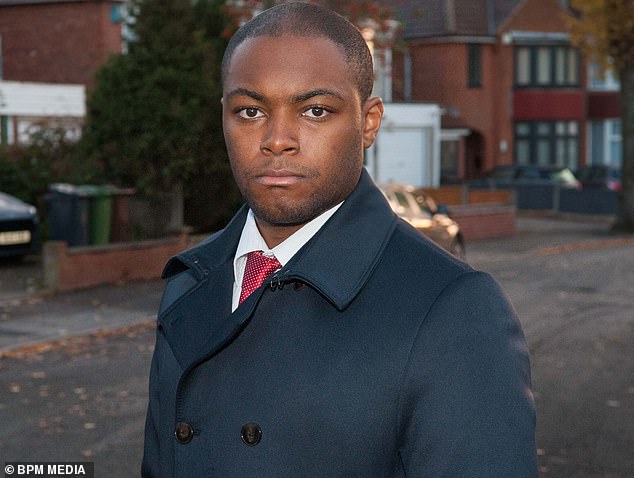 The former assistant Police and Crime Commissioner for the West Midlands has been barred from driving after driving under the influence of alcohol and crashing his vehicle.

After striking the curb and losing control on Warren Road in Oscott, he caused extensive damage to his Renault Megane.

The 30-year-old remained at the scene, and officers detected the odor of alcohol on him. It was then discovered that he was more than twice the legal drinking limit for driving.

Mr. Ashley (right), shown with the police and crime commissioner for the West Midlands, David Jamieson, has been banned from driving for 18 months.

On the route to the police station, he questioned authorities about the implications of the offense on his employment and the maximum penalty, according to the Birmingham Magistrates’ Court.

Bertie, of Shelley Drive in Stockland Green, is actively seeking employment and will have difficulty paying his council tax, according to his attorney.

He pled guilty to drunk driving on Thursday. He was suspended from driving for 18 months and fined £120. Bertie apologized to the magistrates for taking up their time and stated that he was “very humiliated.”

The incident occurred just after midnight on Saturday, November 22, a few hours after England’s scoreless draw with the United States in the group stage of the World Cup the evening before. Prosecutor Ekene Pruce stated, “Police got complaints of a road traffic collision with a Renault Megane blocking the route.”

A firefighter alerted the police that the driver of the vehicle was now seated in his friend’s car on the opposite side of the road.

She stated that Bertie introduced himself to the police officers. Ms. Pruce continued, “Mr. Bertie stated he was driving when he collided with the curb, causing him to spin and damage his vehicle.”

Officer detected a strong odor of alcohol emanating from Mr. Bertie. His eyes were bloodshot and glassy. He was shaky on his feet and his speech was slurred. Consequently, he was arrested.

“As he was being taken into detention, he asked the police what the maximum penalty for driving under the influence was. He continued to inquire about how the charge would affect his employment situation.

She stated that Bertie blew a result of 75 micrograms of alcohol per millilitres of breath, exceeding the legal limit of 35, and that he admitted to drinking four pints of cider while watching the England game during an interview.

Bertie had served as Assistant PCC under then-commissioner David Jamieson from 2016 until 2020.

His attorney, who would only identify himself as Mr. Peterson, presented the judge with a number of references.

He stated, “They paint a vivid picture.” One can summarize them by stating, ‘It’s terribly unfortunate that someone with such immense talent and who has already contributed so beautifully to his community is involved in this.’

Mr. Peterson confirmed that Bertie had quit his previous job, had “limited” money but was able to pay a fine, and would be seeking employment in the new year.

He told the court that his client would “battle” to pay his payments, including his council tax and other “financial obligations,” and adding, “It will be difficult.” It will also be difficult for his family, which, like him, is extremely embarrassed of what he has done.

Additionally, Bertie was forced to pay £135 in court costs and £48 in victim surcharge. He accepted the offer of a course to minimize the duration of his driving prohibition.

The chair of the bench stated, “We have read all of your letters, which speak well to your character.” Unfortunately, though, with character comes responsibilities. Drunk driving may wreak devastation on individuals’ lives.

Before leaving the courtroom, Bertie addressed the magistrates and stated, “I accept responsibility for my mistake. It is inexcusable. I feel terribly ashamed and embarrassed by my behavior. I am fully aware of the gravity of my conduct.

“It is lucky that nobody was injured as a result. I would want to thank and apologize to the magistrates for their time. I recognize that you are under severe stress and that resources are limited. I apologize for adding to your early workload and hardship.