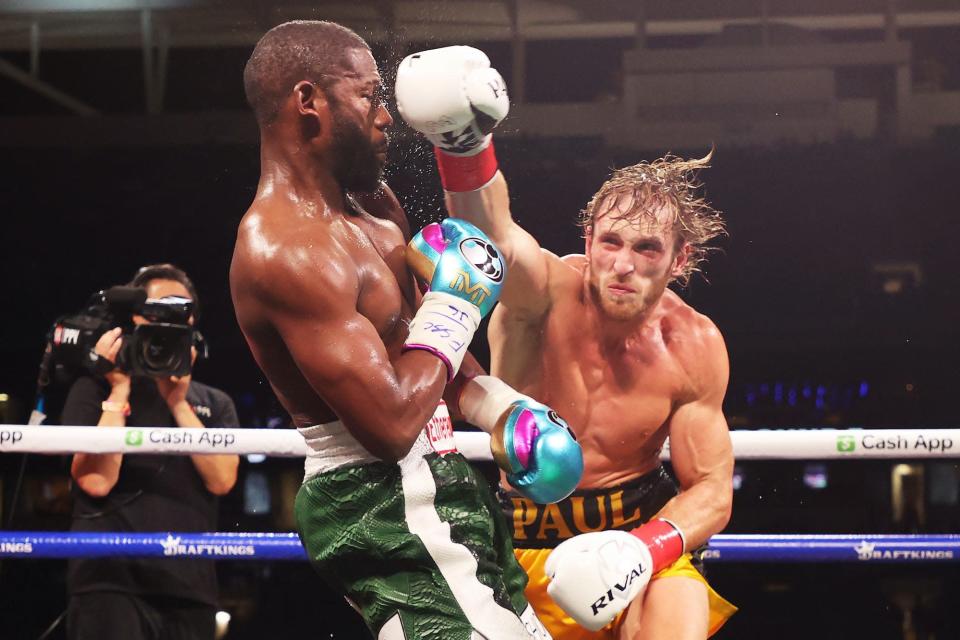 First, Jake Paul stole Floyd Mayweather’s cap and attempted to flee. Now, one year later, he is also pursuing the legacy of the American athlete.

Mayweather is reportedly getting $20 million for defeating the MMA superstar Miru Asakura in two rounds on Saturday at a Rizin 38 event in Saitama, Japan. Mayweather has become a regular on the exhibition boxing circuit since his retirement.

In November, he returns to the ring for another demonstration against YouTube creator Deji, a sub-novice boxer without a victory, in a bout planned to take place at the Coca-Cola Arena in Dubai.

In a Twitter challenge, Paul hopes to entice Mayweather, 45, into what he termed a “genuine fight.” According to Paul, it’s high time Mayweather faced a legitimate opponent.

Mayweather has previously dealt with a Paul sibling, so he presumably knows what he’s getting himself into by deciding to verbally spar with Jake over the weekend.

In May of last year, Mayweather fought Logan, Jake’s brother, for eight rounds.

Once Jake Paul battles a “real fighter,” it will be “awful,” according to Floyd Mayweather and Logan Paul.

Jake seized Mayweather’s hat and attempted to flee the Mayweather-Paul promotion, which was a raucous, chaotic event. However, he ran into the security detail of the former boxing champion.

Mayweather was furious and roamed the hallways while yelling, “I’ll murder that motherfucker!”

He said, “But once he fights a true fighter, things are going to become ugly.”

Mayweather praised Paul’s ability to “make good money” while promoting fights. Paul is “entertaining,” according to Mayweather. “I like it.”

He concluded by stating: “As long as he keeps fighting MMA fighters and YouTubers, he will continue to look beautiful and shine. But once he fights a genuine fighter, one who can actually fight, it won’t be nearly as good.”

Paul’s response did not require much time.

Floyd Mayweather is damaging his legacy, according to Jake Paul.
Jake Paul.

On September 25, he shared a 90-second footage on social media in which he stated, “Floyd Mayweather is destroying his reputation” by fighting “no-name people.”

Paul believes that his followers’ money and time are being wasted.

“Floyd, I’ll fight you, and you know it’s one of the biggest battles in boxing,” Paul stated, before suggesting that the fight might earn them each $100 million.

Paul has his own fight to prepare for, as he faces MMA great Anderson Silva on October 29 at the Gila River Arena in Glendale, Arizona, during a Showtime pay-per-view event.

Perhaps their schedules will coincide in 2023 to allow them to engage in combat.