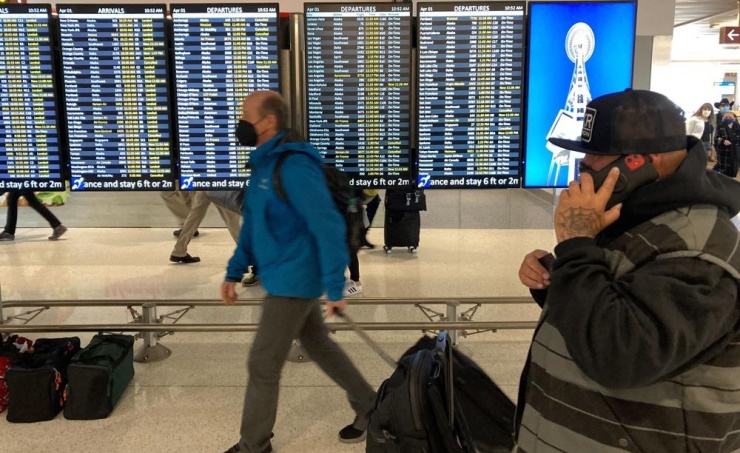 Federal judge in Florida struck down a national mask mandate on airplanes and mass transit Monday, and airlines and airports swiftly began repealing their requirements that passengers wear face coverings.

The judge’s decision freed airlines, airports and mass transit systems to make their own decisions about mask requirements, resulting in a mix of responses.

The major airlines switched to a mask optional policy, with some eliciting cheers from passengers when the changes were announced over loudspeakers.

The Transportation Security Administration said Monday night that it would it will no longer enforce the mask requirement, and airports in Houston and Dallas almost immediately did away with their mandates after the TSA announcement, AP News reported.

Sleepy passengers on a Delta Air Lines flight between Atlanta and Barcelona, Spain, cheered and applauded when a flight attendant announced the news mid-flight over the ocean.

“No one’s any happier than we are,” the attendant says in a video posted by Dillon Thomas, a CBS Denver reporter, who was on the flight. She added that people who wanted to keep on their masks were encouraged to do so.

“But we’re ready to give ém up,” she added. “So thank you and happy unmasking day!”

New York City’s public transit system planned to keep its mask requirement in place. The Washington Metropolitan Area Transit Authority said it would make masks optional for riders on its buses and trains

The Association of Flight Attendants, the nation’s largest union of cabin crews, has recently taken a neutral position on the mask rule because its members are divided about the issue. On Monday, the union’s president appealed for calm on planes and in airports.

“The last thing we need for workers on the frontlines or passengers traveling today is confusion and chaos,” union leader Sara Nelson said.

Nelson said it takes airlines 24 to 48 hours to put new procedures in place and tell employees about them. She said passengers should check with airlines for updates about travel requirements.

The mask requirement covered airlines, airports, mass transit and taxis, and was the biggest vestige of pandemic restrictions that were once the norm across the country.

The decision by U.S. District Judge Kathryn Kimball Mizelle in Tampa, an appointee of former President Donald Trump, also said the U.S. Centers for Disease Control and Prevention failed to justify its decision and did not follow proper rulemaking procedures that left it fatally flawed.

The MTA operates New York City buses and subway trains as well as two commuter rail lines. Face coverings have been mandatory on all trains and buses since early in the pandemic.

United Airlines said in a statement that, effective immediately, masks would no longer be required on domestic flights or certain international flights.

“While this means that our employees are no longer required to wear a mask – and no longer have to enforce a mask requirement for most of the flying public – they will be able to wear masks if they choose to do so, as the CDC continues to strongly recommend wearing a mask on public transit,” United said.