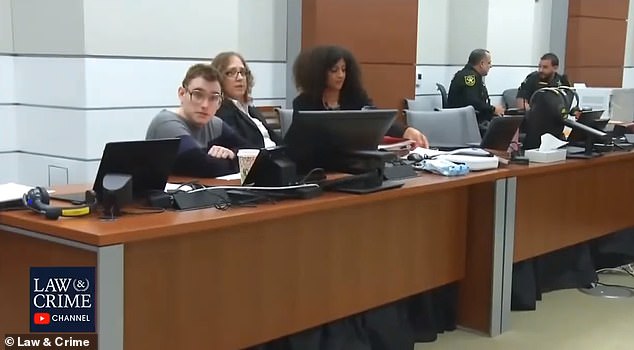 The Florida bar is investigating a member of mass murderer Nikolas Cruz’s defense team after she was caught on camera flipping the bird and laughing hysterically with the convicted mass murderer.

A Florida bar spokeswoman said a day after Cruz was sentenced to life in prison and spared the death penalty that Tamara Curtis, one of Cruz’s defense attorneys, is being examined owing to an inquiry into her behavior in court.

Cruz, 24, engaged in a shooting rampage at Marjory Stoneman Douglas High School in Parkland, Florida in 2018, killing 17 and injuring 17 others.

Last month, a parent of a victim accused Cruz’s defense team of ‘losing their compassion towards the victims’ due to her behavior.

Jaime Guttenberg’s father, Fred Guttenberg, stated that he will “never, ever forgive that moment.” Curtis laughed with Cruz and compared her conduct to that of an immature, punk-like child.

In the video, Curtis first notices the camera and alerts Cruz, who also looks over inquisitively.

Then, Curtis begins her shenanigans by sarcastically waving at the camera while turning away from it.

Then, suddenly, Curtis decides to flip the bird at the camera and rub it on her cheek; the coworker next to her is uncomfortable, but Cruz thinks it humorous.

The two then giggle about her behavior, which one victim’s mom described as “disgusting and disrespectful.”

The Florida bar is investigating attorney Tamara Curtis after a video surfaced of her laughing with convicted mass shooter Nikolas Cruz, which enraged victims’ families.

In the clip, Curtis can be seen pointing out a newly installed camera to a colleague standing next to her.

Cruz, Curtis, and their colleague appear to be discussing the camera before Curtis waves without glancing at it.

She laughs with Cruz as she presses her middle finger on her face, ostensibly as a joke. Meanwhile, her colleague uncomfortably attempts to move on.

The announcement of the investigation follows a two-day hearing in which the parents of the victims harshly criticized Cruz’s defense team.

Annika Dworet, whose son Nicholas Dworet was killed in the shooting and who attended virtually every day of the trial, criticized the defense for ‘hugging, touching, and joking with this cold-blooded murderer.’

Dworet also described the conduct as “repulsive and unethical.”

You are permitted to defend him. You have no right to insult those who have suffered a loss. He added, “None”

Even Broward County Circuit Judge Elizabeth Scherer commented on the actions of the defense team when they accused the victims’ families of attacking them personally.

Melissa McNeill, Cruz’s chief public defender, stated, “I performed my job, as did every member of this team, and we should not be targeted personally for that.”

Cruz, shown with Assistant Public Defender Melody McNeill, was acquitted on Thursday after the jury could not reach a unanimous decision that he should be put to death.

Judge Scherer was so irritated by the remarks that she eventually shouted at the defense.

“When these folks are unhappy about certain events that have transpired from that table, such as giving the middle finger at this court, laughing, and making jokes, they are agitated. She questioned, ‘What is the problem when these people have sat in this courtroom and saw this behavior from that table and they want to complain?’

Execution of Cruz, 24, was not universally agreed upon by the jury, which rendered its verdict on Thursday. Reuters first reported that the jury recommended the death penalty, but shortly thereafter issued a correction.

A death sentence in Florida requires a unanimous vote on at least one count. Life in prison is the sole alternative.

While the judgement was being read, Cruz sat in a slumped position and stared at the table. However, when it was discovered that the confessed murderer would receive life in prison rather than the death penalty, a rare smile appeared on his face.

Families and friends of the victims reacted to the verdict with visible emotion.

Many shook their heads, wore angry expressions, and hid their eyes. Some parents wept as they left the courtroom.

Cruz stated that he chose Valentine’s Day to prevent Stoneman Douglas kids from ever celebrating the occasion again.

The massacre is the deadliest mass shooting ever tried in the United States. In the United States, nine additional individuals who fatally shot at least 17 people died by suicide or police shooting during or immediately after their attacks.

During the three-month sentencing hearing, the prosecution contended that Cruz’s crime was both premeditated and brutal and cruel, which are among the factors Florida law uses to determine a death sentence.

Cruz’s defense team acknowledged the gravity of his actions, but asked jurors to consider mitigating circumstances, such as his mental health difficulties caused by his biological mother’s drug usage during pregnancy.