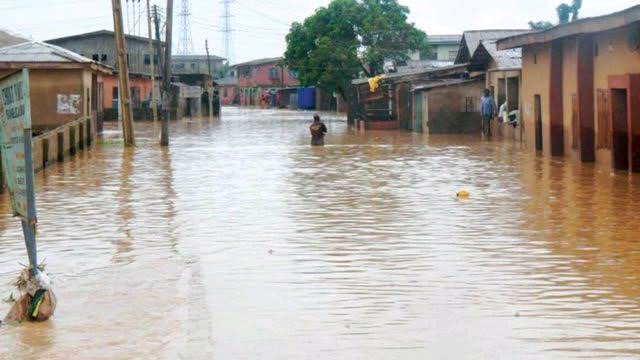 The warning came following the heavy down pour in Abuja on Wednesday.

The Director General of the FCT Emergency Management Agency,(FEMA), Alhaji Abbas Idriss announced this in a statement signed by the Head Public Relations Officer of the Agency, Nkechi Isa.

Reacting to the heavy floods which affected, Dogongada in Lokogoma and  Damangaza and Apo Dutse in Gudu Districts, Idriss has hinted on plan to barricade the sleep road from Games Village to the Airport road and other areas within the FCT in order to avert flooding and save lives and property.

“We will continue to educate residents as a government in the language they will understand.Motorists should avoid driving on running water, wait  for five or more minutes for the water to subside before driving. Cross check before leaving homes or your work places to ensure that the road is safe”, he said.
While noting that the onset of the rains in the FCT Will commence on the 14th of this month,  Idriss said, “We are going to have a little above normal rainfall this year. Therefore, residents should be wary of the devastating effects of flooding.

Residents should avoid building on water ways, water channels,  raising retention walls, and ensure that the required  25 meters gap between your house and the water channels/roads are allowed for safety in accordance with the Abuja master plan.  When you do this we will all be safe”.
The FEMA boss who blamed flooding in the Territory on indiscriminate construction, infractions and urbanisation, assured that relevant agencies were working to remove all obstructions.

“We will advise them to remove any obstructions, nobody should assume that they can block water ways just because they want to have a wider space,” he said.
He also revealed that, ” In the meantime, the Search and Rescue Unit of the Forcasting Response and Mitigation of FEMA,(FRM), has rescued a resident from drowing at Dogongada in the early hours of Wednesday”.
According to the Acting Director FRM, Mrs Florence Wenegieme,  the rescue followed a distress call on the 112 emergency toll free number at 5.25am, local time.
She informed that the victim’s vehicle was totally submerged , leaving him trapped on the roof top of his car.