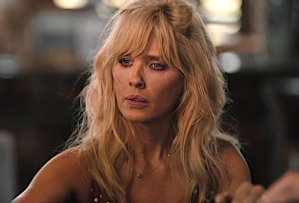 In the eighth episode of Yellowstone’s fifth season, titled “The Dream Is Not Me,” Jamie Dutton (Wes Bentley) wages war on his adopted father, Governor John Dutton (Kevin Costner), by petitioning the Montana state assembly to approve a Senate panel pursuing impeachment. Even worse, John learns of Jamie’s devious, albeit clever, political maneuver after delivering an impassioned speech in support of Thomas Rainwater (Gil Birmingham) and the Broken Rock Reservation as they plot to fight the proposed federal pipeline. Obviously, Jamie’s impeachment scheme contradicts John’s efforts to create rapport with Rainwater and his team.

Beth (Kelly Reilly) breaks into Jamie’s home with a brick, beats him with said brick, and threatens to expose footage of him disposing of his true father’s body if he does not quit as Attorney General immediately after discovering of his deception. Jamie, in a bold move, calls her bluff, declaring that he will bring down the Duttons and the Yellowstone by revealing the location of “the railway station” and the identity of the person at the bottom of the canyon. Beth learns of the “train station” for the first time, and when she confronts John about it later, he confirms her darkest suspicions. Now that a war has been declared between the Duttons, Beth and Jamie publicly plot to murder each other, much to the dismay of John and the delight of Sarah Atwood (Dawn Olivieri).

Rip (Cole Hauser) and the Bunkhouse Boys prepare to move the herd to the Texas panhandle for the winter amidst all the political machinations. The 6666 ranch owns the area, thus the Yellowstone men and Teeter (Jen Landon) will undoubtedly see Jimmy (Jefferson White) and his girlfriend Emily (Kathleen Kelly) at some time. In the meantime, John requests that Kayce (Luke Grimes), Monica (Kelsey Asbille), and Tate (Breckin Merrill) oversee ranch operations and construct a home for themselves.

From the return of everyone’s favorite wrangler and former bronc rider to Beth’s stunning realization about her family’s terrible past, here are five things to watch for in Episode 8.

JIMMY IS BACK AND PROSPERING

Jimmy gained John’s approval to depart the Yellowstone for the 6666 in the Season 4 finale, but his fate remains unknown. This season finally gives fans an update on Jimmy’s health, and he’s doing fantastic! He’s still in love with Emily, the 6666’s veterinarian, and they’re living like rabbits. Jimmy looks at Emily fondly and declares, “I’m pleased” as the two are drinking beer and arguing over bottle tops in their backyard. Emily responds, as sassy as ever, “You should be.” I hope you’re purchasing lottery tickets, given your good fortune.” How can he withstand her? We can only hope that he can get along with the Bunkhouse Boys when their paths inevitably intersect in Season 5, Part 2.

Who can forget John’s eloquent words to Monica during her son’s funeral in Season 4, Episode 4? “All he saw of this world was you, and all he knew was that you loved him,” John reassured Monica near the grave. Monica tells to John after some time has gone that their talk has stayed with her. Monica tells him, as she thanks him for his advice, “[Your words] benefited me more than you know. I have relied on them every day and night since you spoke them.” Their newly formed relationship makes it simpler for John to ask her and Kayce to assist with Yellowstone management while he is in Helena and Rip is with the herd. She naturally concurs. John needed just to ask.

WHEN IT RAINES, THE WATER FLOWS

With Jamie’s coup d’état in the works, it appears that John’s situation cannot get much worse… until it does. Remember the Yellowstone National Park wolves with radio collars that Colby (Demin Richards) and Ethan (Ian Bohen) accidently killed in Episode 2? Both Rip and John attempted to conceal this incident in following episodes. John, Lynelle Perry (Wendy Moniz), and Clara (Lili Kay) are watching the news when the other shoe drops. The revelation that Wolf Watch, an environmental organisation that funds radio collar research in wolf packs, has found that the wolves on the Yellowstone could have been killed is not good for the Governor’s reputation. John must immediately mobilize his environmental advisor!

BETH LEARNS ABOUT THE TRAIN STATION

It’s hard to imagine that after four seasons of different murders (mainly committed by her husband), Beth had no idea what a “train station” is, given that she was present when Jamie dumped his biological father’s body there. Jamie’s astonished question, “Do you think I just picked a turnout on the Wyoming border at fucking random?” leaves her dumbfounded. At the bottom of that canyon are a century’s worth of our family’s secrets.” When Beth later bursts into the Governor’s residence to confront John, he does not dispute it. “Everyone who has assaulted us has thrown their trash there,” he explains. Beth suggests without hesitation that Jamie belongs there.

Kayce has acted throughout the entire fourth season with his vision quest ending in mind. In Episode 3, he intended to resign as Livestock Commissioner, but Monica convinced him otherwise in Episode 5 by assuring him that nothing would come between them. In the penultimate scene of the midseason finale, Monica and Kayce debate returning to the Yellowstone and relocating to East Camp. “In my vision, I had to choose between this location and you,” Kayce reveals. Monica asks, “Was East Camp in your vision?” If Kayce shakes his head, Monica responds, “Perhaps this is how we can have both.” Let’s hope.

»Five Things You Might Have Missed on ‘Yellowstone’ Season 5 Episode 8, From Jimmy’s Return to Beth’s Horrible Discovery«