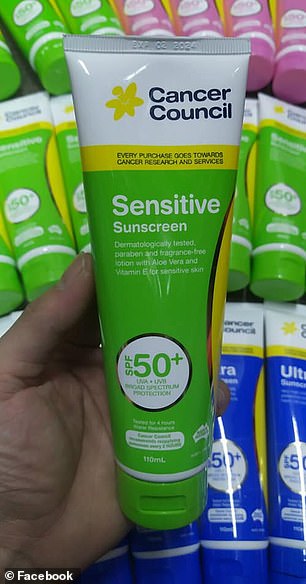 Consumers in Australia are being urged to cease using five popular sunscreens that have been immediately withdrawn due to cancer concerns.

Product Safety Australia expressed worry that benzene, a potentially cancer-causing chemical, may have been added accidently during manufacture.

Four of the goods were manufactured by two large companies, the Cancer Council and Nivea, and were sold in hundreds of supermarkets, grocery stores, pharmacies, and online stores across Australia.

The product safety recall notices for the Cancer Council and Nivea products were issued on Wednesday.

Two of the Cancer Council’s sensitive sunscreen SPF 50+ products, including the 110ml tube and the 200ml pump pack, were officially recalled for this reason.

Two of Nivea’s sun protect and moisture sunscreen lotions are also affected by the same concerns.

Nivea’s SPF 30, 200ml bottle of sun protect and moisture cream and the SPF 50+ 65ml roll-on have also been recalled urgently.

The 2XP cream was for sale at Coles, Hawthorn East in Victoria, Product Safety Australia said.

‘Benzene is classified as a carcinogen (a substance that could potentially cause cancer),’ a statement from Product Safety Australia said.